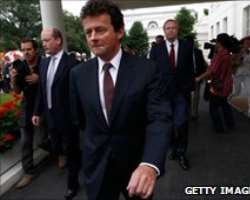 BP boss Tony Hayward is set to face a grilling in the US Congress, a day after the oil firm agreed a $20bn (£13.5bn) compensation fund for victims of the Gulf of Mexico oil spill.

Mr Hayward is expected to tell a Congress committee that he is “personally devastated” by the spill.

The firm says it will withhold dividends until the end of the year.

Meanwhile, BP's containment device for the ruptured well is working again after a brief shutdown.

The capping system, which pipes leaking oil to a vessel on the ocean surface, was switched off for five hours on Tuesday after lightning struck the containment ship.

And BP announced on Wednesday that a second containment system had been launched, designed to bring oil and gas to the surface.

Meanwhile, BP chairman Carl-Henric Svanberg has been forced to apologise after telling reporters that BP was not a greedy company and that it cared “about the small people”. He later said he “spoke clumsily”.

It follows a gaffe by Mr Hayward last month – in which he said he wanted the leak to stop as he would “like my life back” – which was widely seen as insensitive to all those affected by the 20 April rig blast and subsequent spill.

Mr Hayward, who has been heavily criticised for his handling of the crisis, is scheduled to give evidence to the House of Representatives Committee on Energy and Commerce on Thursday afternoon.

BP released snippets of a prepared statement he will read to the committee in which he will say: “I fully grasp the terrible reality of the situation.”

And he will also update the Congressmen with the progress of BP's internal investigation into the spill.

“I understand people want a simple answer about why this happened and who is to blame,” he will say.

“The truth, however, is that this is a complex accident, caused by an unprecedented combination of failures.”

BP has been accused by US politicians of failing to follow proper procedures in the run up to the 20 April explosion on the Deepwater Horizon rig.

Mr Hayward has been asked to answer specific questions, which were set out in a letter http://thehill.com/blogs/congress-blog/energy-a-environment/103255-letter-to-tony-hayward-chief-executive-officer-of-bp-rep-henry-waxman-and-rep-bart-stupak on Sunday by Henry Waxman, chairman of the committee, and fellow committee member Bart Stupak.

In particular, they want Mr Hayward to answer allegations that BP:

Went against the advice of its own plan review regarding the well's design and chose a riskier, cheaper and quicker casing option

Used only six centralisers to make sure the casing ran down the centre of the well bore, rather than the 21 recommended by sub-contractor Halliburton

“It appears that BP repeatedly chose risky procedures in order to reduce costs and save time and made minimal efforts to contain the added risk,” the congressmen wrote.

“If this is what happened, BP's carelessness and complacency have inflicted a heavy toll on the Gulf, its inhabitants, and the workers on the rig,” they say.

'Strong and viable company'
BP has agreed to pay $5bn into the compensation account, known as an escrow fund, before the end of 2010. The remainder is to be paid over the following three years.

The agreement was announced by US President Barack Obama after he met BP executives at the White House.

“We will continue to hold BP and all other responsible parties accountable,” Mr Obama said.

“And I'm absolutely confident BP will be able to meet its obligations to the Gulf Coast and to the American people.”

“BP is a strong and viable company and it is in all of our interests that it remain so.”

Mr Obama insisted there would be no cap on the amount BP might be asked to contribute.

Analysts said the firm's finances should be strong enough to withstand the fiscal fallout from the spill.

The blast on the Deepwater Horizon on 20 April led to the deaths of 11 people, caused the rig to sink, and has since seen hundreds of thousands of barrels of oil spew into the Gulf of Mexico.

Some of the oil is now washing ashore in states along the Gulf coast.

The spill threatens to cripple businesses and seriously damage wildlife across the Gulf.

It has already paralysed the fishing industry in the area and wiped billions of dollars off BP's value.