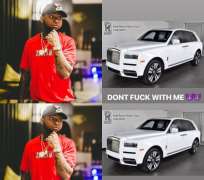 David Adedeji Adeleke popularly known as Davido just shocked many of his fans by acquiring Rolls-Royce Cullinan 2019 Worth N350 Million.

The singer is known to be one who has a flair for expensive rides as he has over the years, purchased quite expensive cars and even acquired a Porsche for his girlfriend, Chioma, earlier this year.

The singer is now ending the quite successful year on a good note as he announced on his Instagram page, moments ago, that he’s expecting a brand new Rolls-Royce Cullinan 2019 worth 350 million naira.

He shared photos of the new whip on his Insta stories, see post below;