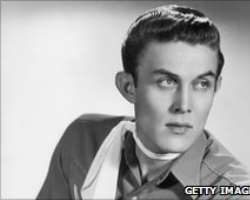 Jimmy Dean, the country singer who had a big hit with Big Bad John, has died at the age of 81.

His wife, Donna Meade Dean, said her husband passed away at their home in Virginia in the US.

“He was amazing. He had a lot of talents,” she said of the singer, who starred in The Jimmy Dean Show in the 1950s.

Muppet Show
The Texan-born singer sold the company in 1984 to Sara Lee Foods but continued to be its chairman and TV spokesperson.

Big Bad John, a song about a coal mining hero, was a crossover hit in 1961, making it to number one in the country and pop charts in the US.

The Jimmy Dean show helped introduce puppeteer Jim Henson to the US public. His regular appearances on the show made Rowlf, the piano-playing dog, the first Muppet to become a household name.