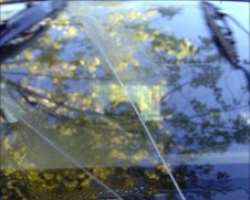 By Emma Wilkinson
Windscreen wiper water may be the cause of 20% of cases of Legionnaires' Disease in England and Wales, the Health Protection Agency says.

Stagnant, warm water is a breeding ground for the Legionella bacterium, which when inhaled causes pneumonia.

Yet adding screenwash kills the bacteria and could save lives, the Agency advised.

The finding came after researchers spotted that professional drivers are five times more likely to be infected.

Legionnaires' disease is fairly rare. Most cases are sporadic and a source of the infection is not found.

The number of cases vary from year to year, but in 2009 there were 345 in England and Wales – although some infections were caught overseas.

It mainly affects the over 50s and is generally more common in men.

Early symptoms feel similar to flu with muscle aches, tiredness, headaches, dry cough and fever. It is fatal in around 10-15% of patients.

Driving
To work out why people who spend a long time driving were at higher risk of infection, the research team in the south-west branch of the HPA carried out a questionnaire of people infected.

They found that those most at risk were those who drove or travelled in a van, those who drove through industrial areas, and those who spent a lot of time in the car or who often had the car window open.

In all they found that the biggest risk was associated with not adding screenwash to windscreen wiper water, the European Journal of Epidemiology reports.

In a pilot study carried out by the HPA, traces of Legionella were found in one in five cars that did not have screenwash, but in no cars that did.

Dr Isabel Oliver, regional director of the HPA South West, said more research was needed but people may want to check they have screenwash in their cars as they usually contain agents which would stop the growth of bacteria.

“It does not spread from person to person but is present in water environments and is breathed in when it gets into the air in fine particles or mist.”

Professor Hugh Pennington, an expert in bacteriology, said the advice to add screenwash was very sound – especially as it would also lead to a cleaner windscreen.

“This is a bug which lives in the environment and will take advantage of warm water systems that are not cleaned out.

“Legionnaires' is rare but it kills people and it's an extremely unpleasant disease.

“If you can prevent it with something this simple then it's a no brainer really.”