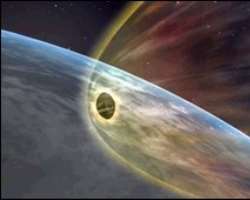 By Jonathan Amos
Japan's Hayabusa probe returns to Earth on Sunday, releasing a capsule into the atmosphere that scientists hope will contain samples from asteroid Itokawa.

If the 40cm-wide conical disc survives the blistering heat of the descent and can deploy a parachute, it should touch down in Australia at about 1400 GMT.

No-one really knows whether Hayabusa succeeded in grabbing samples from Itokawa's surface during a 2005 visit.

Its capture mechanism did not work as designed, analysis has shown.

They believe a lot of dust would have been kicked up when Hayabusa landed on the space rock, and some of this must have found its way inside the probe.

“At the moment of touch-down, Hayabusa collided with the surface and stayed on the surface for 30 minutes, so we believe some material will have found its way into the sample container,” senior project team member Professor Hitoshi Kuninaka told BBC News.

If the Hayabusa capsule is confirmed to contain even just dusty fragments from the asteroid, it would represent a scientific first and a remarkable triumph for the Japanese who have had to battle a succession of technical problems.

Although the grab mechanism failed, dust may still have found its way inside

Hayabusa was launched in 2003 and used ion engines to propel itself out to Itokawa, a 500m-long potato-shaped rock which drifts between the orbit of Earth and beyond Mars.

Not long after the mission started, a solar flare damaged the spacecraft, but it was really at its destination that Hayabusa's woes began to mount.

As well as the capture mechanism malfunction, a mini-probe called Minerva that was to have hopped across the asteroid's surface accidentally drifted off into space.

Even on the journey home, the Hayabusa team had to work around communication drop-outs and propulsion glitches.

But each time an issue came up, the scientists and engineers working on the project managed to find an elegant solution.

Now, after one final course correction during the past week, Hayabusa is bound to hit the Earth's atmosphere above Australia.

(2) At altitude of 200km, probe and capsule encounter atmosphere

(4) Main spacecraft has no protection and burns up

(6) Capsule is tracked to landing via beacon and radar

Just a few hours before the spacecraft begins this plunge, it will push out the sample capsule in front of it.

The main spacecraft will be destroyed during the descent, but the container is built to survive the 3,000-degree heat of re-entry.

“The capsule will come into the atmosphere with a very high velocity – 12km/s; and so in order to endure such a high heat input, we need a special heat-shield,” said Professor Kuninaka. “Its surface is made of carbon phenolic (resin).”

Assuming it makes it through this test of fire, the capsule will deploy a parachute at an altitude of about 10km. This should bring the conical pod to a gentle stop in the Australian Outback's Woomera Prohibited Range.

Radar tracking and a beacon in the container itself should guide scientists to the drop location.

The requirement to avoid all earthly contamination means the capsule will not immediately be moved from its landing site. The sterile protocols the mission team will follow will not permit the capsule's evacuation and transfer to Japan for a few days.

The container will be delivered to Jaxa's Sagamihara curation facility for analysis. It could be some months before scientists are able to say with confidence that Hayabusa did indeed capture fragments of Itokawa.

Professor Trevor Ireland, from the Australian National University, who will get to work on the samples, said no rocks on Earth could provide this information because they had been recycled many times.

“If we look at anything on Earth it has been put through the wringer; it's been messed up by plate-tectonic processes and geochemical processes. So if we want to look at what our Earth was made of, we have to leave Earth. That's the importance of Hayabusa and going to Itokawa.”