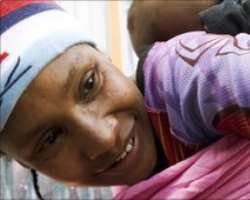 By Jane Dreaper
Campaigners have pledged to keep up pressure on finance ministers to fund efforts to stop women dying in pregnancy and childbirth.

It comes after the Bill and Melinda Gates Foundation announced a boost in funds for women and child health.

World leaders agreed 10 years ago that maternal deaths should be reduced by 75% by 2015.

Progress on this – the fifth Millennium Development Goal (MDG) – has until recently been slow – but activists say there is now a sense of momentum.

Around 350,000 women around the world die each year from preventable problems such as infections or blood clots. Often, they have not had access to basic care during or after their pregnancy.

Closing the conference, the president, Jill Sheffield, said: “Finance ministers are on our list – and they're not going to stay safe.

“They don't always see this as a critical issue. Our economic arguments for investing in women's health are pretty dramatic.”

On Monday, Melinda Gates announced at the conference that the foundation set up by her and her computer tycoon husband Bill Gates would be devoting $1.5bn (or more than £1bn) to boosting women and children's health over the next five years.

This has been interpreted as a change in direction from funding specific vaccines and the fight against particular diseases.

Some campaigners have called for a new global fund for maternal and child health.

Local support groups in Nairobi give advice on breast feeding

There is already a Global Fund to fight AIDS, tuberculosis and malaria, which channels billions of pounds of taxpayers' money given by governments, including the UK.

Its head, Dr Michel Kazatchkine, insisted his organisation was best placed to continue tackling the problems which led to mothers dying.

He said: “It's very clear from recent analysis that the slow progress on MDG5 has been because of AIDS. And at least one in five deaths at the time of childbirth is directly linked to HIV.

“So when countries come to us requesting money, we want to see plans which take an integrated approach to these problems. And we want to see a strong emphasis on maternal and child health.

“But we're ready to do more. If additional resources were to come – for example, from pledges at the G8 – we'd be available to host that funding, because we're proved ourselves to be a strong mechanism.”

Significant event
The editor of the Lancet medical journal, Dr Richard Horton, claimed the Women Deliver meeting had been “the most significant event for the future of women and children in 20 years”.

He said: “That might sound like a ridiculously overblown claim. But this year is the moment when the world will decide where to spend tens of billions of pounds over the next five years in the push towards the MDGs.

“We've heard here how countries such as China and Egypt have made extraordinary progress in bringing down deaths. They can offer various solutions for the countries that are doing badly in sub-Saharan Africa.”

But Dr Horton said it was “outrageous” that the latest investment announced by the Gates Foundation would not fund abortion services.

He added: “Unsafe abortion contributes to one in seven maternal deaths across the world. These women are already stigmatised, and they shouldn't be ignored.”

The Gates Foundation says it supports family planning, but it does not fund abortion or take a position on the issue.