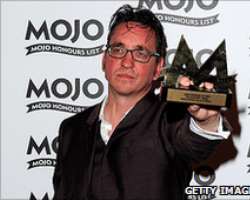 Jimmy Page: “Oh Wow! Thank you so so much”
Led Zeppelin guitarist Jimmy Page has been inducted into the Mojo Hall Of Fame at the magazine's award ceremony.

But Florence and the Machine, who led the field with four nominations before the London event, was overlooked.

Page, who last won a Mojo award for the 2007 Led Zeppelin reunion, revealed he was working on new material with a number of different projects.

He has been taken on by Robbie Williams' management company IE.

“I'm just looking forward to making some music and surprising people with it,” he said.

“It won't be just teaming up with lots of people who are [big] names. I've got an idea of something which I've had for a long time and now's the time to do it.”

But he declined to give further details about his collaborators or his new direction.

Mojo is now the best-selling music magazine in the UK, selling more than twice as many copies as NME.

Five winners were voted for by Mojo readers, including best album, best single and best live act. That category saw US act Midlake beat Kasabian, Arctic Monkeys and Florence and the Machine.

A further 16 honorary prizes were handed out. They included the classic album award, which went to The Stone Roses for their 1989 self-titled debut LP.

Bassist Mani, who picked up the trophy, said it was “gratefully received”.

Asked why there were few new guitar bands making a splash in the way The Stone Roses did, Mani replied: “Bands of my era had a whacked out agenda. They walked it, they lived it, they breathed it.

“[They were] not necessarily the best musicians in the world. I think what's wrong with British music at the moment is people are too career-orientated. They're afraid, or record companies will not allow them to take risks, and that just makes everything so uniform.”

A number of other acts from the 1980s were also honoured, including Marc Almond, Jean Michelle Jarre and Teardrop Explodes.

Teardrop Explodes were due to reunite for the first time in 28 years to accept the Mojo inspiration award, but singer Julian Cope did not turn up.

Mojo editor Phil Alexander said: “The 80s are almost the new 60s. You can hear the influence of that decade everywhere.

“The aspects of the 80s we chose to celebrate at the Mojo Honours List reflect the genuine innovation of that period and I think you sense that the best music made at that time has had a massive impact on the musicians of today, in the same way that the 60s and 70s did previously.

“Somehow, there is a freedom in parts of 80s music that resonates among a new generation of musicians and fans.”