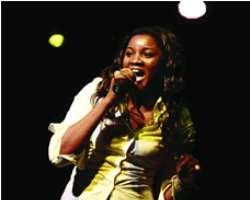 Omosexy
She's a screen divaof all time. She's delectable. And she's got the sex appeal too! Little wonder she's famously called, Omo Sexy. But can you beat this? After four kids, sultry actress Omotola Jalade-Ekeinde has proved that she's not only blessed with acting talent. Of course, she's also got vocal prowess and power in her big butt.

If you are in doubt, ask music lovers in Makurdi, Benue State, who recently watched Omotola in her first major musical performance at the Democracy Day Concert organized by Dream Pointers. For the over 30 minutes that Omotola performed, she gave the crowd more than enough reason to love and cherish her as a pop artiste.

Omotola has always been an actress, who with hard work and determination, had climbed to the top of her career. But she took many by surprise when she veered into music in 2005 with the release of Gba, an album that did relatively well for a debutant. Yet, Omotola's critics won't let go, insinuating that her album was a flop and that consequently, she has given up on music.

Right now, the happily married actress-cum-musician is back with brand new pop music, redefined beats and a stagecraft perfected after series of rehearsals. She has also got a committed team behind her. This all showed in Markurdi when Omotola mounted the stage in what seemed her first major performance in the presence of very important dignitaries including Deputy Governor, Steven Lawani and a crowd of over 40 000.

The artiste kicked off her show with Feel Alright, a pop track of her yet-to-be released album, a performance that set the audience on fire. She went ahead to perform Hero, an R&B song also of her sophomore album and followed this with Gba, a popular track from her last album that sent the crowd on a dancing spree.

If Omotola's vocal dexterity had caused a stir at the show that also paraded top acts like 2Face, J.Martin and Zaaki Adzay, then her stagecraft had caused some ripples. Makurdi fans will not forget in a hurry her sexy dance steps. They had screamed in ecstasy as Omotola shook and rolled her big backside to the rhythm of the night. It was indeed a testimony that Omo Sexy still got the sex appeal - after four grown up kids!

Speaking to Blockbuster after the show, Omotola said she has proved that her sojourn in the music industry is not a flash in the pan. 'I am here to stay. It has taken me five years to put all of these together and I believe people with good sense of music including my fans and lovers of pop music will be talking about me for a long time to come.'

Judging by her performance at the concert, an album launch come July 16 and 18 plus an international deal in the making, Omotola is sure on the road to mega stardom.