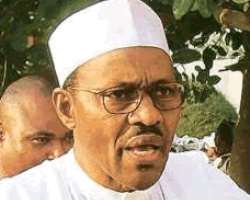 Buhari
Retired Major Umar Abubakar, a Kaduna-based social critic, does not, in any way, qualify as a seer. But he seems to have a foreknowledge of the current political happenings in the country, as he has, since 2008, predicted that someone from the Niger Delta region could become president.

In one of the interviews granted one of our sister publications in 2008, Umar had said: 'Don't forget that oil is the prime factor that is keeping us together in this country today; what if the presidency goes to the Niger Delta area, and these people have been agitating for resource control, and not only resource control, they have been agitating that the headquarters of NNPC should be moved out of Abuja and Lagos to their area?

What happens, if they have full control of the resources of this country? Are we sure that the presidency would be allowed to rotate to another area in this country? So I feel, this (rotation of presidency) is a wasted effort and should not even arise. It is a selfish principle. Nigerians should be allowed to select their leaders, irrespective of where they come from; that way, we would get the best.'

With such position, the question that is on the lips of many people is: Will the North cave in on the 2011 presidency?

In the weeks and months preceding former President Umar Musa Yar'Adua's death, the actions and inactions of the northerner elite and politicians appeared to point to the fact that at the appropriate time, the North may perhaps, be willing to do battle with President Goodluck Jonathan and all his backers over 2011 Presidency. For instance, at the time when the controversy over whether or not Jonathan should take full charge of the Presidency was still raging, General Muhammad Buhari (rtd), who had called for the impeachment of the late Yar'Adua, did not hesitate to sound a note warning to Jonathan on the need to not only strive to conduct a free and credible election, but also to be ready to quit office after the election, insisting that the president must 'bow out gracefully.'

He made the declaration in Kaduna while addressing members of the National Unity Forum (NUF), that visited him.

The forum, led by Alhaji Maigida Musa Abdu, had, before visiting Buhari, paid courtesy calls on other notable northern leaders, including former Inspector-General of Police, Alhaji Dikko Yusuf. Their mission, Saturday Sun learnt, was to seek the opinions of the northern leaders on how best to handle the then Yar'Adua mess, and at the same time ensuring that the region does not lose out completely in the power equation, especially as the country approaches 2011.

Buhari had, among other things, argued then that the Federal Executive Council must save the nation from the then agony the nation was going through, by declaring the late president incapacitated to pave the way for his impeachment. He further argued then that Nigeria, as a nation, should not have been in the situation it found itself then, if the provisions of the constitution were respected by the leadership of the country. He further insisted that the constitution has specific provisions on how an ailing president could be succeeded, even as he noted that the refusal by the federal cabinet then to respect and apply the constitutional provisions contributed to the then leadership crisis in the country.

In an apparent reference to the resolution passed by the National Assembly, which had empowered Jonathan to function as an acting president then, the former head of state noted that it was wrong to introduce extra-constitutional measures to tackle problems already addressed by the constitution.

To this end, he stressed that the joy of political expediency would never replace clear regulations spelt out by the laws of the land, adding: 'Political expediency won't remedy this kind of problem because if the Executive Council of the Federation had acted in accordance with the constitution, by invoking the necessary sections to declare the president incapacitated, we would not have found ourselves in this present situation.

'As you can see, adopting extra-constitutional measures have not addressed the problem. If it had, we would not have been subjected to the raging debates and controversy going on. So we must go back to the constitution. The EXCOF must do the right thing because once we start moving away from the constitution, then we are inviting anarchy.'

He called on Jonathan to make electoral reforms the priority of his government, saying that he had a feeling Nigerians would stand up for the truth and reject any imposition, or any government that wins election through 'unfair' means in 2011.

While maintaining that unless free and fair polls are conducted next year, both the polity and the country would not be stabilised, the former military leader further said that the first measure of commitment to the electoral reform agenda was to reorganize the Independent National Electoral omission (INEC) and make it more effective.

He further argued then that INEC, as was constituted, could not give Nigerians what they need in 2011, stressing that Nigerians should take a cue from the governorship elections in Anambra State.

'Look at what happened in Anambra. Voters' list went missing and a lot of people were denied the right to vote in the election. If INEC cannot organize credible poll in one state, how can they do it in 36 states and the FCT', he asked rhetorically.

Buhari also noted that the days of the PDP government were numbered. He had declared: 'In one way or the other, the PDP will be out of office by next May,' even as he asked the then acting president to do everything within his powers to 'bow out gracefully.'

And like Buhari, the former IGP, Yusuf, who had played host to the group a week preceding the meeting with Buhari, did not mince words when he called on the North to ensure that it produced a 'credible and acceptable replacement' for Yar'Adua in 2011 presidential election. Incidentally, just as Buhari, the former police boss is from Katsina State. The late Yar'Adua was also from the state.

Saturday Sun can authoritatively reveal that until Yar'Adua took ill, Dikko was one of the honorary advisers to the late President.

'If you read Dikko's interview recently, you will agree with me that he was one of those advising Yar'Adua. I can confirm to you that the late Yar'Adua listened to him and late Talban Bauchi, Ibrahim Tahir, very well,' one of the highly placed sources told Saturday Sun.

Speaking further on the possibility of the North rising against President Jonathan, the source further told Saturday Sun: 'I know you guys in the media have always believed that it will be difficult for us in the North to reach a common position on 2011. Just wait and see.

'I'm sure you are aware that in Adamawa, already, Atiku and Senator Jubril Aminu are closing ranks. This has to happen because there is the need for us to come together and unite over this issue. And at the appropriate time, we will show ourselves.'

From all indications, it seems only time will tell whether or not the North will cave in on 2011 Presidency.