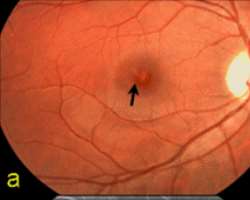 The laser damaged the teenager's retina, as shown in this photo

Medics from the Royal Liverpool Hospital and Manchester Eye Hospital spoke out after treating a teenager who had shone a laser into his eyes.

The Health Protection Agency said it had received reports of retinal damage and recommended that only pointers with limited power should be sold.

A spokesman said: “The Health Protection Agency has not been made aware of any injuries to the surface of the eye caused by laser pointers – such injuries are usually caused by persistent rubbing of the eye after the laser beam has been shone into the eye.

“Clinicians have, however, made the HPA aware that scotomas – retinal injuries causing abnormal vision – have been caused by high power green laser pointers.

“The HPA recommends that laser pointers generally available to the public should be restricted to less than 1 milliwatt as no such injuries have been reported at this power.”

The teenager in question had bought a green, diode laser pointer over the internet and, while playing with it, shone the laser beam into his eyes.

Tests showed that the youngster had central scotomas, or dark spots, in his vision.

He was treated by Dr Kimia Ziahosseini and colleagues from the two hospitals.

Continue reading the main story
Although his vision has now returned to normal, he is at risk of developing problems later on in life as a result of the damage to his retina

Dr Kimia Ziahosseini
After the incident, they found that the teenager's clearness of vision was poor. Tests revealed burns to the surface of the eye and disturbances to the retina, the light sensitive tissue at the back of the eye.

Two months later, his vision had improved but some retinal damage remained.

“Although his vision has now returned to normal, he is at risk of developing problems later on in life as a result of the damage to his retina,” said Dr Ziahosseini.

The UK Health Protection Agency advises that laser products sold to the public for use as laser pointers should be restricted to devices with laser power less than 1 Milliwatt.

This is in accordance with the British Standard.
The laser pointers should also be accompanied by sufficient information on how to operate them safely, the HPA says.

Barbara McLaughlan, campaigns manager at the Royal National Institute of Blind People, said: “Laser pointers are deceptive. They look safe but they can be very dangerous, particularly ones available on the internet which may possess a very strong beam.

“If misused and shone into a person's eyes, even for just a few seconds, the damage can be devastating,” she said.