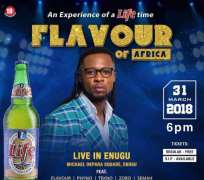 The concert, which promises to be a spectacular musical experience, will feature some of Africa’s biggest music icons amongst which are Phyno, Tekno, Zoro and Semah G.Weifer the blind Liberian singer at the Michael Opara Square, Independence Layout, and Enugu.

Flavour N’abania, who became the Life Continental Beer brand ambassador in 2016, has been in the forefront of promoting HiLife Fest, a talent hunt and an initiative of Nigerian Breweries Plc to discover fresh talents in highlife genre of music in the southeastern region of Nigeria.

According to Emmanuel Agu, Portfolio Manager, Mainstream Lager and Stout Brands NBPlc., “Life Beer’s support for the Flavour of Africa free concert is a way of giving our consumers in Enugu and beyond the good opportunity of touching base with their icon -Flavour, and it is in line with our efforts at preserving the unique Igbo culture by supporting the music that connects them to their root for which Flavour is a perfect fit”.

For Flavour, it is like going back to his roots “I cannot wait to see not only my fans in the city but also the folks I grew up with together in Enugu. This concert promises to be a “Life-time” experience and a concert like none in the coal city”

Music fans in Enugu are getting ready for a riveting concert with Flavour. They also stand a chance to win VIP ticket, otherspectacular gifts including backstage passes, signed CDs and many more freebies on the day.

Life Continental beer is a fine quality lager beer produced by Nigerian Breweries Plc., made from the choicest grains, hops extract and the purest of waters. Life is expertly brewed to give that rich, crisp distinctive taste and well-rounded aroma in true quality fashion of the master brewer.