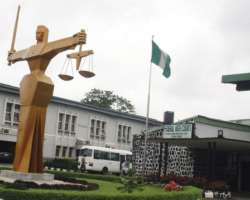 Others are Enesi Jimoh Suleiman, former caretaker chairman, Adavi Local Government Area of Kogi state accused of embezzling N250 Million; Hon. Samuel Abiodun Ojo, Commissioner for Agriculture, and Yahaya Abubakar, former Chairman, Okene Local Government, Kogi state, both accused of stealing N150million and N104million respectively. No plea was taken from any of the accused persons as the amended charges were merely filed in the court.

In the amended charges, 10 count charges were preferred against Suleiman; 14 against Joseph Faniyi; eight against Yahaya Abubakar; 11 against Obaro Victor Kayode, 11 against Abiodun Ojo and 11 against Ropo Asala.

In the amended charges, they are accused of converting over N216 million public funds for personal use.

Similarly, the duo of Gabriel Dauda, former chairman of Ogori/Magongo Local Government Area of Kogi State and Albert Soje Adesina, Commissioner for Agriculture who were arraigned before Justice Adamu Bello of the Federal High Court Abuja, on a fourteen count charge of money laundering and criminal misappropriation of fund to the tune of over N800 Million took a fresh plea on the amended charges when the case came up today, June 8.

It would be recalled that the EFCC, on April 1, 2010 arraigned eight top officials of the Kogi state government at the Federal High Court, Abuja for offences bordering on money laundering, forgery and criminal misappropriation of funds

Justice Bello, after listening carefully to both counsel, granted the accused bail in the sum of N100million, with one surety each, who must be a Nigerian of honest and reasonable character, must reside in Abuja and own land worth N100 million. And each of the accused must also submit his international passport to the registrar of the court, must not travel without the approval of the court. The accused were ordered remanded in Kuje prison until the fulfilment of the bail conditions.

Justice David Okorowa also granted bail to the duo of Enesi Suleiman and Tolorunjuwa Faniyi in the sum of N50 million each, one surety in like sum, who should not be less than a deputy director in a federal government agency and with landed property in Abuja. The property should be certified by AGIS, while the accused persons are to deposit their international passports with the registrar of the court.

Yahaya Abubakar also got a reprieve from Justice Okorowa as he was granted bail in the sum of N20 million and a surety in like sum. The surety should not be less than a Deputy Director in the civil service and must also have landed property in Abuja certified by AGIS and title documents deposited with the court.

Justice David Okorowa, after listening to argument for bail in respect of the quartet of Asala, Kayode, Hon Faniyi, and Ojo granted bail in the sum of N20 million each, with surety in like sum. The surety should have landed property in Abuja within Abuja Municipal Area Council, AMAC. The accused are also to deposit their passport photograph with the court’s deputy chief registrar. The judge however ordered the accused persons to be reminded in Kuje prison pending when they will fulfil the bail conditions.