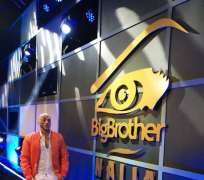 On Saturday 17th, March 2018, DJ Sose was welcomed into the Big Brother Naija house as he played hit tunes for the live party. DJ Sose joined the housemates as he also followed the Away from Africa themed party, wearing a Gold kaftan styled outfit with flared trousers designed by South African fashion designer David Tlale and was styled by Nigerian Celebrity Stylist Swanky Jerry.

The housemates partied extra hard as DJ Sose played Nigerian hit after hit. Not only did he play a mix of present and throwback songs, he shocked the house with his vibrant dance moves giving the housemates even more reason to showcase their steps.

The highlight of the night was when DJ Sose surprised the housemates with the remix of Mr. Real’s ‘Legbegbe’ which included each house members name in the song.

Other highlights of the night:

DJ Sose returned to the Big Brother Studio on Sunday 18th, March 2018 to the Live Eviction show. He made sure to give the live studio audience the opportunity to party it up like the housemates did.

He kept his style simple and to a minimum wearing all white with an orange bomber jacket top it off, styled by Nigerian Celebrity Stylist Swanky Jerry.

The DJ took to his Instagram page to say a big thank you to God, Big Brother Naija, his family and all of Africa for giving him the opportunity to showcase his talent.