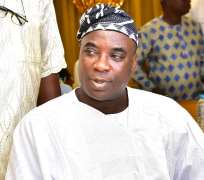 He was speaking as part of a panel that discussed the evolution of traditional Yoruba music at the 2018 Ariya Repete Roundtable Discourse. The event which held at Park Inn by Radisson in Abeokuta, sought to create a panacea to discuss the successes recorded and threats to Fuji and Juju genres of Yoruba music.

K1, while answering a question posed to him by the event moderator, Jide Taiwo of TheNetng who wanted to find out what K1 thought of dearth of fresh talents in his field, said:

“I am not happy. How can I be happy when the very language is being threatened? Most Nigerian parents nowadays do not allow their children to speak the Yoruba language. Of course it will affect the music and that’s what we’re seeing now. Present day musicians are not making effective use of the language in their music. Nigerians often call their own mother tongue ‘vernacular’. It’s a worrying development, not something to be proud of.” As if to buttress his point, the keynote speaker at the event Dr. Kola Adesina of the Department of Mass Communication, Crescent University Abeokuta, made it known that according to UNESCO; Yoruba is one of the five thousand languages that are facing the danger of being extinct in less than fifty years. He said “A method used to check if this is correct is by attempting to speak the language continuously for ten minutes, without interjecting with foreign words like ‘but, when, because’ and so on. How many people can do this?”

Upon discovering this revelation by Dr. Kola Adesina, the audience made up of music lovers, media practitioners and other musicians such as Wale Thompson and Taiye Currency - attempted to communicate only in Yoruba language for the rest of the event.

The Ariya Repete Roundtable Discourse is a precursor to the annual Ariya Repete talent hunt that seeks to find out young talents in the Fuji and Juju genres. Auditions has started on March 13 in Ado-Ekiti, Sango-Ota and across eight cities in Nigeria.