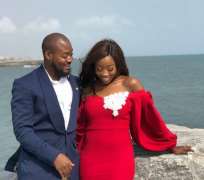 So if you’ve been crushing on Beverly forever without shooting your shot, sorry, you’re late. According to the news making the rounds, it appears our Nollywood darling has found love and is set to tie the knot with the man of her dreams.

Our inside scoop has confirmed that Adeolu Adefarasin, nephew of the House on The Rock Pastor Paul Adefarasin, is the lucky man.

Adeolu Adefarasin, himself an actor, is quickly forging his own path in Nollywood and he appears to be madly in love with Beverly judging from this photo the pair took at the beach on Valentine’s day.

While it’s not impossible that the photo is a behind-the-screen photo on the set of “The Eve,” a new movie they both starred in, which is also set to hit the cinemas March 29th, we can’t deny that they certainly look good together.

So dear Beverly and Adeolu, should we expect another #baad or nah? We’ll just keep our fingers crossed.