Orezi And Tekno In Whine For Daddy Video 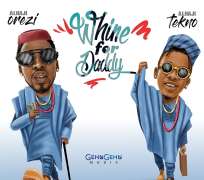 Orezi releases the video to 'Whine for Daddy' his first single of 2018 featuring Tekno. The video comes after the official unveiling of his new venture Gehn Gehn Music, an entertainment company.

The video directed by Paul Gambit was shot in Lagos. The music video has a colourful and warm background also features singer and actress Kora Obidi as the leading lady dancing to the rhythmic flow from Orezi and Tekno.

Esegine Orezi Allen is a Nigerian Afro hip hop, Dancehall and Reggae recording artiste currently signed to Sprisal Entertainment. Born and raised in Isoko Delta State, he grew up with his family and is the first of five children.

Orezi graduated from the University of Lagos with a degree in Urban and Regional planning and majored in Landscape Architecture. In 2009 Orezi kick started his music career with the release of his first single titled ‘I no fit lie’ and this has made him work with some of Nigeria’s top music producers. It later became Radio Continental's theme song. Afterwards, he headlined a show named after the song. In 2010, he released ‘High BP’ then subsequently released ‘Jamilaya’ and both songs got great reviews.

In 2014, Orezi released another single "Shoki" as well as the music video for his song ‘You Garrit’. Orezi debut album’ GhenGhen’ was released in 2015 and it featured high profile Nigerian artistes Wizkid, Davido, Flavour, M.i Abaga, Timaya, 9ice and Ice Prince. The album had 21 songs including his mega hit songs ‘Rihanna’, Shoki, Ogede and Shuperu.

Following his 2015 ‘GhenGhen’ album, Orezi released a controversial artwork for his song Call the police. Despite the backlash, the video was eventually released in 2016 and received rave reviews.

In 2017, Orezi carved a niche for himself with the afro beat sound in his song ‘Cooking Pot’ produced by TymG shot by Adasa. The song and video channeled Afro beat Legend FelaAnikulapoKutiand addressed social vices like Alcoholism, Rape, Domestic Violence and advocates for consensual sex.The video has now been nominated for Best video AFRIMA 2017.

Orezi’s pace and consistency in the music scene has kept his relevance and net worth growing at a spontaneous rate.