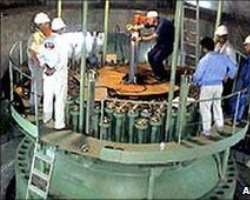 Iran faces its toughest sanctions for failing to comply with UN demands over its nuclear enrichment, the US says.

The Security Council is set to vote on a fourth round of sanctions to tighten financial curbs on Iran, while expanding a limited arms embargo.

US Secretary of State Hillary Clinton said they were “the most significant sanctions that Iran has ever faced”.

But Iran's president warned his country would not agree to nuclear talks if the sanctions were imposed.

Hillary Clinton
US Secretary of State
Last resort or lost opportunity?
Mahmoud Ahmadinejad also said that a nuclear fuel-swap deal brokered by Turkey and Brazil was an offer that would not be repeated.

Iran agreed in May to deposit 1,200kg of low-enriched uranium with Turkey, in return for reactor fuel, but the US and its Western allies said the agreement was too little too late.

They fear Tehran is secretly trying to build a nuclear bomb. Iran says its programme is aimed solely at peaceful energy use.

Kill negotiations?
There have been three rounds of UN sanctions against Iran, blocking trade of “sensitive nuclear material”, freezing the financial assets of those involved in Iran's nuclear activities, banning all of Iran's arms exports and encouraging scrutiny of the dealings of Iranian banks.

Iran will face tough UN sanctions, said the US ambssador to the UN

The new set of proposed sanctions is aimed at putting pressure on Tehran to stop enriching uranium.

Although it was watered down during negotiations with Russia and China on Tuesday, it does tighten existing restrictions on areas like shipping and finance.

Its proposals include:
Prohibiting Iran from buying several categories of heavy weapons including attack helicopters and missiles

Urging all states to inspect cargo suspected of containing banned items to and from Iran in their territory, including seaports and airports

Mrs Clinton was upbeat about the prospect of of the new resolution, which has the support of all five of the UN's veto-holding members.