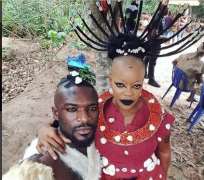 Nollywood actress, Eve Esin, is gradually becoming one actress that loves taking very daring roles and she is ever ready to go the extra mile at ensuring she gives her best.

It is not her first time having her hair cut but it can be painful when you know that the hairs are already growing and the director says it has to go down totally.

The actress almost looks that the ladies that acted the much talked about movie, ‘Black Panther,’ and she could as well pass for a Hollywood actress someday.