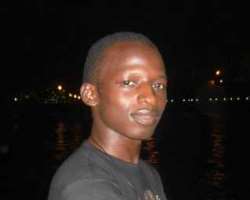 Kenneth Gyang who was once recognized as the youngest filmmaker in Nigeria years ago is one of the few filmmakers selected from all over the world to share the Hubert Bals Fund in Netherlands. Gyang was selected for his film Confusion Na Wa and has already secured a lucrative distribution deal for Netherlands, Belgium and Luxembourg.

Confusion Na Wa has also been selected for the competitive Durban FilmMart of the Durban Film Festival next month July.

Gyang has patnered with the BBC as director on Wetin Dey. He produced and directed the Finding Aisha series for which he won the Young Producer of the Year award at the last Future Awards in Lagos.

The Hubert Bals Fund of the International Film Festival Rotterdam (IFFR) selected twenty-nine projects to be given grants for script development, digital production, postproduction, distribution or workshops. In its Spring 2010 selection, the Fund gives 450,000 Euro to projects from twenty-two countries. (see full list below).

The line up of the IFFR's Hubert Bals Fund Spring 2010 Selection Round in full:

Kenneth Gyang is a director, writer and producer from Barkin Ladi, Plateau State. His work in film and television has gained recognition at home and abroad.

Inspired by listening to BBC World Service, Kenneth's early ambition was a career in radio. However, shortly after completing school he came across a poster advertsing Nigeria's National Film Institute, located in
the nearby state capital, Jos. He applied and was accepted.

Kenneth's interest was initially in screen-writing only but, frustrated with seeing unimaginative interpretations of his work, decided to try directing one of his scripts. The result was the award winning short Mummy Lagos, a two-minute meditation on the African food that has been screened at festivals worldwide. Most notably, Kenneth presented the film at the 2006 Berllinale.

Following this early success, Kenneth has been working constantly as a director.
Highlights include being one of three directors of the groundbreaking BBC series Wetin Dey and writing and directing SoundCity's drama series Finding Aisha. The former is widely acknowledged to have set new standards in West African television and was screened at the 2007 EMMY awards in Los Angeles. In recognition of the latter he won Screen Producer of the Year at the 2010 Future Awards.