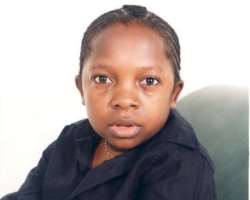 Aki, the miniature in nature comic actor surprised the Nollywood and his fans when he celebrated a tall and beautiful lady at the exotic nightclub in Ikeja called Q Club about two years now. In fact, the stakeholders in Nollywood and lovers of the very funny actor all teemed to rejoice with him when he celebrated his fiancée amidst pomp and fanfare.

Having professed their love to the society, the entire lovers of the entertainment industry was shocked when, a couple of weeks after their 'display of love in public', the lovers sang a new rhythm. Fresh facts why their affair crumbled like a poorly arranged pack of cards has emerged and if what we gathered is anything to go by, the two loverbirds may never come back again.

We gathered that, Nancy also known as Nkechi's parent, from the outset, was not in support of their beautiful daughter's marriage to the 'dwarf' actor, the reason, according to the scoop is that they would never affianced their daughter to a 'dwarf'.

Meanwhile, while Aki was said to be looking forward to a blossom future marriage, the girl on the other hand, was said to have been seeing other guys most especially tall and handsome friends of Chinedu, though, this can not be substantiated.

As you are reading this, the former lovers who were fond of themselves before the crack in their affair have since gone their separate ways. While Aki has moved on with his acting career, Nkechi who had a fatal accident and got her two legs affected, www.nollywoodgists.com exclusively gathered, is doing well with her studies at the Lagos State University.