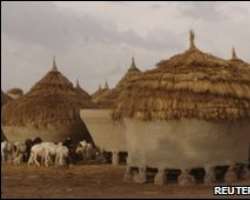 The houses themselves are not being demolished
Listen to article

Hundreds more children could die of lead poisoning in northern Nigeria, a decontamination expert says, but officials have downplayed the fears.

Some 163 people - mostly children - have died in recent weeks after villagers started digging for gold in areas with high concentrations of lead.

The top layer of soil in the worst affected village is to be excavated.

Twenty-five children from the village have been hospitalised with another 80 set for treatment in the coming days.

Richard Fuller, from the Blacksmith Institute, which is trying to clean up the villages, told the BBC's Focus on Africa programme that hundreds of children have tested with high levels of lead "that are likely to lead to them dying in the near future".

He said that children were more vulnerable to lead poisoning than adults.

But Zamfara State Director of Public Health Sa'adu Idris told the BBC that such fears were wrong.

He said that only one clinical death from lead poisoning had been recorded over the past three weeks, with the other deaths occurring earlier on.

He also assured that the villages would be cleaned up within the next four weeks.

However, the operation to dig up the top 5cm (2in) of soil in the remote village of Yar'Gailma has been delayed until Tuesday because bad roads have delayed the heavy machinery, officials say.

The contaminated soil is to be replaced with clean earth.

The BBC's Haruna Shehu Tangaza in Zamfara State says that houses in the village will not be demolished - their floors are to be covered in cement to protect residents from lead poisoning.

Correspondents say the Zamfara state government is facing criticism that they were slow to notice the toxic pollution.

Last week, the spokesman for the local government denied to journalists that any lead poisoning had occurred at all.

Health authorities have set up two camps in the area to treat people who are suffering the symptoms of lead poisoning.

Some families are believed to have taken crushed rock ore into their homes.

In their attempts to extract gold, deadly amounts of lead were released - it is thought that soil containing lead deposits was dumped in water sources and in places where children played.

Rainy season fears
The deaths were discovered during the country's annual immunisation programme, when officials realised there were virtually no children in several villages.

Villagers said the children had died of malaria and it was only when a team from international aid agency Medecins Sans Frontiers took blood tests from local people that the high concentrations of lead were discovered.

Zamfara State had recently employed a Chinese company to mine gold in the area, adds our correspondent.

But villagers had also attempted to capitalise by digging for the precious metal themselves - an illegal activity in Nigeria.

Some fear the contamination could spread during the rainy season which has just begun, if heavy rains wash the lead into new areas.