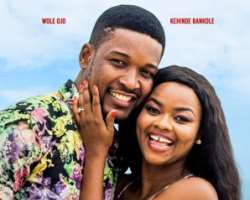 The movie was directed by Rotimi Rajii and produced by Adefajo Ayobami. It tells the story of a handsome player, Uche, who is ready to finally tie the marital knot with the love of his life. Their relationship is made in Heaven and married life is destined to be great. ‘24’ hours before d-day, Uche hangs out with his team of Casanovas to bid bachelorhood good bye. All goes well until a dark secret rears its ugly head and sets off a chain reaction that forcefully subjects their love to the burning test flames.

Rotimi Raji, the director with a powerful creative mind with works such as psycho-thriller movie, ‘Truth or Die’, Freezing Point (TV series) is confident that the movie has what it takes to create a memorable viewing experience for movie goers.

Kehinde Bankole whose filmography includes The Meeting, October 1, believes the movie portrays the consequences of insincerity in relationships from which viewers can learn from while being highly entertained. Bachelor’s Eve is distributed by Metro Classic Pictures and will be in cinemas across Nigeria from February 16th 2018.