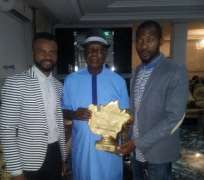 The Chairman Police Service commission, Mike Okiro who also was the Inspector General of police was honoured recently in Imo State capital at the Eastern Achievers Award 2017 as EASTERN LIVING LEGEND OF THE YEAR.

According to report, the award ceremony took place on the 4th of November 2017 at Grand Cubana event center Owerri. The event also featured The most prestigious pageant in the East: Queen of Igboland Beauty pageant, which produce Queen Ann Okeke from Ihiala in Anambra State as the QUEEN OF IGBOLAND 2017.

Queen Irene Onwuka, Sp Andrew Enwerem and many others.

Reports from the event organizers; Dkcmodels Entertainment says the Awardees were honoured on the bases of their contribution and effort in community development and Youth empowerment within the South East.