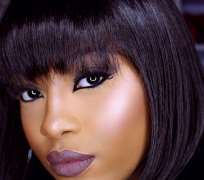 Youthful! Beautiful! Adorable, the fast rising IT girl AMIRA IBRAHIM-ALFA, Host of 53 EXTRA TV broadcast on M-Net Africa Magic has been invited to Host the next Miss Commonwealth International Pageant 2017, in London UK.

We at Commonwealth International Ltd, London, UK are pleased and proud to inform you that Miss Amira Ibrahim-Alfa has been invited to be our co-host in respect of our forth coming event, holding our Annual Empowerment Event for commonwealth Nations to come and participant on World platform in London during the period from 24th November 2017 to 27th November 2017, the Grand Coronation Night is scheduled for Sunday 26TH November 2017.

We are pleased to inform the public of Amira Ibrahim-Alfa's acceptance to co-host this year's 17th Anniversary of Miss Commonwealth International Pageant 2017.

Participants for the prestigious Commonwealth tittles are coming from Africa, Asia-pacific, Caribbean and Euro Atlantic, these are sectors of Commonwealth.

Amira Ibrahim- Alfa, the American born Nigerian, holds a master degree in Theatre Arts from Middlesex University London, UK and BA (Hons) degree in Advertising from the University Of The Arts London (LCC). She passed The Performing Arts School exam in Lamda, UK.

During her maters program 2015/2016, she came to Nigeria and did her internship with EbonyLife TV in production (as a Production Assistant) and primarily worked on the First Stars Reality Show (a competitive reality show that gave young filmmakers the opportunity to show their creativity and skills to a global audience).

Amira started school production act at the age of 3 years old and first broke into the Nigerian media scene at the age of 9 years old when she stared alongside Joke Silva, Olu Jacobs, Buky Ajayi and Bimbo Manuel in an award winning film by Fred Amata- "THE KINGMAKER". She then took a break to further her education in England, where she continued to train and participate in productions e.g. Sweet Charity - As Nickie, OLIVER- as the Artful Dodger, Ipi Tombi just to mention few. She was honoured with the 2012 Excellence Drama award in England (Mounts St. Mary's College Derbyshire).

Amira is currently The Face of Africa Fashion Week Nigeria and London 2017.