Why I Did Not Sack My Service Chiefs â€“ Jonathan 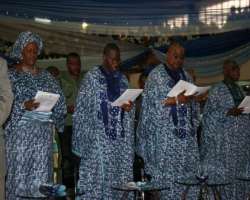 
San Francisco, June 03, (THEWILL) – Nigerian President Goodluck Jonathan earlier today in Ibadan, Oyo State revealed he was advised to 'remove' the service chiefs when he assumed office as Acting President of the country but added that he chose not to act on the advise as such a move may have destabilized the country.

Recall that during the long illness of late president Umaru Yar’Adua there was a power struggle between a cabal in the presidency supported by some politicians who frustrated efforts that could easily have allowed Jonathan become Acting President.

When he became Acting President, Jonathan dissolved the Federal Executive Council but spared the service chiefs.

The President who spoke at the Molete Baptist Church was in Oyo State to attend the 60th birthday party of the state Governor, Adebayo Alao-Akala.

He said he felt more comfortable retaining them at "the expense of my own position" to guarantee stability.

"When I was made the Acting President, so many people advised that I should remove the Service Chiefs, but if I did so my conscience would have pricked me so I said let me leave them at the expense of my position.

"I want to thank the Army for this and it gladens my heart to say that despite the political turbulence, the nation has stabilized.

"When I took over from my boss and swore in a vice president, it was an indication that the polity has stabilized."

"In Nigeria, the position of deputy governor appears to be unattractive. It is meant to be for a learning process to enable him take over the reigns of governence but this is not so.

"It is only in Zamfara State that a deputy stepped up to become governor. As politicians, we must learn to trust ourselves," the president said.

The President has since returned to Abuja.