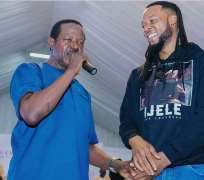 In the picture they took together, the expression on Flavours face was that of excitement as it was so obvious.

The juju and afropop singer who is sometimes called “minister of enjoyment” is well loved by all because of the flavour he adds to his songs to make them unique and a source of inspiration.

Hopefully he wanted human flavour as well and that was the reason why he was seen with Flavour on stage.