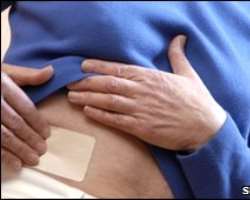 By Emma Wilkinson
Health reporter, BBC News
HRT can be given through patches
Hormone replacement therapy (HRT) may be safer when given as low-dose patches than as pills, a study suggests.

A study of thousands of UK patients between 1987 and 2006 found that patches containing low doses of oestrogen carry a lower risk of stroke than oral HRT therapy.

But the risk of stroke did increase significantly with high-dose patches.

Current advice is to take the lowest effective dose of HRT for the shortest time necessary.

HRT is commonly prescribed to relieve the symptoms of the menopause.

Some types of HRT also contain progesterone.
Continue reading the main story
We'd be interested to see the results of further studies into how the administration of HRT can affect someone's stroke risk

Andrea Lane
Stroke Association
However in recent years studies have raised concerns about an increased risk of breast cancer, heart attacks and strokes associated with use of HRT.

Writing in the British Medical Journal, German and Canadian researchers said some evidence had shown that when it comes to stroke risk the type of HRT preparation may be important.

Using patient records from a general practice research database, they found 15,710 women aged 50-79 who had a diagnosis of stroke and compared them with 59,958 “control” patients.

The results showed that there was no increased risk of stroke in women using low-oestrogen-dose patches compared with women who did not use HRT.

But with high-dose patches there was an increased risk of up to 88%.

Those who used oral HRT had a 25-30% increased risk of stroke compared with those who used none, regardless of what dose of oestrogen they took or whether it was combined with progesterone.

However, that increased risk was not found in patients who took oral HRT for less than one year.

The overall risk of stroke associated with HRT is small and the vast majority of those who had a stroke in the study were not taking it.

Further research
The researchers concluded that although the results do not yet represent “definitive evidence” to promote the use of the patches over tablets, the study should encourage further research to help doctors prescribe the best option.

Andrea Lane, spokesperson for The Stroke Association said: “Past research has shown that HRT can carry a small risk of stroke, particularly in older women when long-term oestrogen treatment is involved.

“This study is interesting as it suggests that HRT skin patches, which contain low levels of the female hormone, oestrogen, will not increase a woman's risk of stroke.

“We'd be interested to see the results of further studies into how the administration of HRT can affect someone's stroke risk.”

She added that anyone concerned about taking HRT should consult their GP or another health professional.