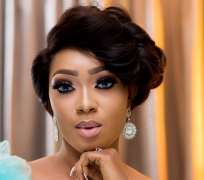 Actress, producer and fashion entrepreneur Peggy Ovire is a year older today October 21, 2017, and all she can do is give glory to God for bringing her this far in life.

The former beauty queen who made her acting debut in 2013, shared some beautiful pictures to mark her birthday which has become a norm among celebrities in the country.

Despite joining some of her industry collegaues in the clothing line business, the actress has not allowed that affect her acting career.