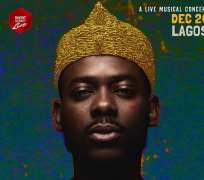 Organized and powered by Bavent Street Live, this concert is set to hold at The Convention Centre, Federal Palace Hotel Lagos on Boxing Day, 26th of December, 2017.

The live music concert will showcase the Urban Highlife singer and his band, The 79thElement, thrill and entertain the audience with classy and authentic performances.

Adekunle Gold plans to light up the stage this December with his unique sound and electrifying performances in this groundbreaking concert.

Reveling in the success of his sold-out prodigious ‘One Night Stand’ London and Dublin concerts, Adekunle Gold’s highly energetic and undeniable stage presence will be in full view for his fans, and the surprise features will add to the excitement that is One Night Stand With Adekunle Gold (ONSWAG).