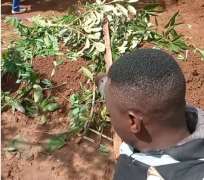 Late Nollywood actor, Okwey Chukwujeku better known as Bossman, has finally been laid to rest after he passed on September, 2017.

The actor’s death came as a shock to many who are fans of the industry as many never believed the story to be true until his burial poster came out.

Some Nollywood celebrities were on ground to pay their last respect to the late actor, who died at the age of 27.