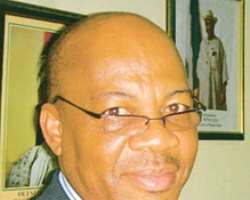 Olisa Agbakoba
Suspense heightened on Monday over nominees for the chairmanship of the Independent National Electoral Commission and its federal commissioners.

A former national president of the Nigerian Bar Association, Mr. Olisa Agbakoba; an ex-president of the Academic Staff Union of Universities, Prof. Attahiru Jega; an ex-Chief Justice of the Federation, Justice Alfa Belgore; a former executive secretary of the National Human Rights Commission, Mr. Bukhari Bello; and a retired Justice of the Supreme Court, Justice George Oguntade, were among those whose names made the rounds in newsrooms as having been chosen by President Goodluck Jonathan for the chairmanship.

The Save Nigeria Group had earlier on Monday said that it expected a member of the civil society or the judiciary to be appointed INEC chairman.

Jonathan had at a meeting with Nigerians resident in France said that the name of the new INEC boss would be presented to the Council of State for advice.

The source claimed that Vice-President Namadi Sambo would preside over the meeting since the President is yet to return from France.

The President had told the Nigerians-based in France that those selected for the top INEC jobs were credible Nigerians.

He said, 'We took time to select these people that will fill position of vacant INEC officials, but I am not going to announce the names now.

'The names will be presented to the Council of State for advice after which it will go to the National Assembly. The person that is going to be the chairman, I have not seen him in my life and I have not spoken with him.'

An online publication, ukpakareport.com, had on Monday said that Belgore had been contacted by the President, adding that barring last-minute hitches, the former CJN would be presented to the council of state.

In an interview with one of our correspondents, the Convener of SNG , Pastor Tunde Bakare, said the group would insist on a non-partisan umpire, who must not be a card- carrying member of any political party.

According to him, the person must not be in doubt and must have been tested and proven over a long period of time.

Bakare said it was expected that the person would emerge from the civil society or the judiciary.

He said even if it was Belgore, stakeholders, including the SNG, would check his antecedents, including his past judgments.

Bakare had earlier in his address at the group's '2011: campaign for free, fair and credible elections,' commended Jonathan for his Democracy Day speech.

He urged the President to ensure credible elections.

Tinubu had, in an interview with journalists at the Kaduna Airport on Sunday, said that appointing Uwais as the INEC chairman was the only way the country could be salvaged as he would ensure that the report on the electoral reform committee was fully implemented.