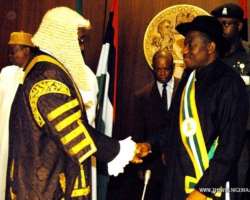 
"All truth passes through three stages. First, it is ridiculed. Second, it is violently opposed. Third, it is accepted as being self-evident" - Arthur Schopenhauer German philosopher (1788 - 1860).Recently I asked a friend what he thought about Goodluck's administration so far, he told me that it was no longer Goodluck, " the goodluck is finished, it is now Jonathan and no more goodluck" He added, ''It was high time we stopped this luck thing and moved ahead to the real thing'.

When growing up whenever my late mom called you three times, there was trouble or she needed to make a salient point. It is in this light that I pen these few lines.