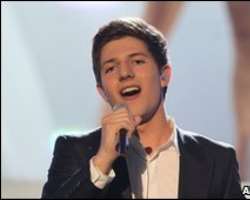 Germany has emerged triumphant at this year's Eurovision Song Contest as the UK limped home in last place.

Speaking after her win, 19-year-old Lena, who scored 246 points with her song Satellite, said: “I'm so happy and so thankful and so grateful.”

Acts from 25 countries took to the stage during the event, hoping to impress voters from across Europe.

Belarus had been trailing in last place for most of the voting until the final marks saw it overtake the UK.

This is the third time the UK has finished in the bottom spot in the past eight years, following on from the dismal performances of Andy Abraham in 2008 and Jemini in 2003.

Bookmakers had made Azerbaijan favourite to win this year's contest. Their chosen act, Safura, was the first contestant to perform on Saturday's show with her song Drip Drop.

Organisers allowed Spain's Daniel Diges to perform twice during the event after a fan disrupted his first performance by jumping on stage.

Ireland's Niamh Kavanagh had been hoping to repeat her winning performance of 1993, but finished in the bottom half of the scoreboard with It's For You.

It is only the second time in the 55-year history of Eurovision that Germany has won, after Nicole's A Little Peace in 1982.

Speaking after the show, Lena said she was “shocked” by her victory.

“I think it's unreal,”she said. “This is such a big thing that I'm just completely freaking out!”

The economic downturn has hit this year hard, though, with several countries having to pull out of the event because they could not afford to take part.

Dubovie's song That Sounds Good to Me was written by Pete Waterman and Mike Stock, best known for churning out hits for the likes of Kylie Minogue and Jason Donovan in the 1980s.

Speaking to the BBC earlier this week, Waterman admitted it was “highly unlikely” the UK would win this year's competition.

However, he added: “There is always an outside chance that something bizarre might happen.”

Dubovie was chosen to represent the UK after securing the most public votes on Your Country Needs You! on BBC One in March.