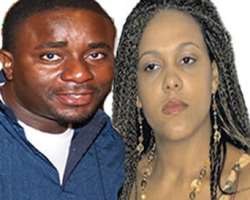 The eventful event which was held at the beach resort in Ikegun owned by the Ondo born American returnee icon of culture and tourism in Nigeria, Wanle Akinboboye, La Campagne Tropicana ended on a laughter mood with the comedienne, Princess, one of the contestants dazzled all with her rib-cracking jokes. Other artistes who contributed to the success of the show include, Banky W, Muma G, Obesere, Weird MC and Dare Art-Alade

Emeka Ike is N7.5M richer with a Jeep to compliment his new status as the first celebrity to emerge in the maiden edition of the Celebrity Showdown. More details later. Genevieve Nnaji achored the show beautifully meanwhile, we shall serve you very soon the full behind-the-scenes stories of how Rita Dominic, Ramsey Nouah, a former beauty queen and others withdrew their interests when they discovered that Genevieve was going to anchor the show and how Genevieve declined to be a contestant with the small amount of N7.5M tagged to the show and how she later became the anchor. We shall also present to you a copy of Emeka Ike's form he filled inside Oriental Hotel, Victoria Island, Lagos as an alternative to Ramsey Nouah. It's hot! It's authouritative! and It's also juicy. Stay glued to this site.

Emeka who stormed the place with his beautiful wife was overwhelmed with the funfair that later took place shortly after his victory. Everything was in excess, food, drinks, small shops, asun to mention but a few.