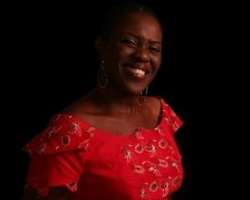 Joke Silva's commitment to the growth of Nollywood is well known. On the day Governor of Central Bank of Nigeria (CBN), Mallam Sanusi Lamido Sanusi ,sneaked into town to unwind, the versatile actress deemed it fit to confront the embattled CBN boss in respect of the indiscrminate lending rates offered to her Nollywood counterparts by the various commercial banks in the country.

The CBN boss had just finished making his speech, tasking Nollywood producers to learn to use their films to portray the good image of the country, when Joke Silva suddenly mounted the podium to give her own remark.

Joke, furious with the way and manner the banking operators inflate their lending rates indiscriminately, especially to movie producers in quest of loans to finance their productions, dared the apex bank governor by asking him to implore the banks in the country to reduce their lending rates to zero level.

“The lending rates are very high, and as a growing industry, Nollywood practitioners cannot continue to afford to borrow loans from these banks at a very high interest rate. The interest rate at the moment is between 20 and 25 per cent.

We are appealing to you, sir, to come to our rescue by formulating a policy that will implore these banks to reduce their lending rates,” the screen goddess muted.

She believed that Nollywood desired to enjoy the same zero interest rates as Education and Agriculture, adding that, “Nollywood has contributed immensely to the nation's economic growth.”

Fortunately, Joke's momentous appeal to the CBN governor was not in vain, as there were many bank executives that graced the gathering, including the Executive Director of the First Bank Plc, Mr Alex Otim and many others, who, many believed, would surely pass the message to their colleagues.

A graduate of English from the University of Lagos, and also a graduate of drama at the prestigious Weber Douglas Academy of Dramatic Arts in London, Joke Silva has been in the entertainment industry for almost three decades. She is married to another screen veteran Olu Jacobs. Having conquered the world of filmography, the seasoned actress is bent on beholding a situation, where her colleagues in the industry enjoy reduced lending rates from the banks.

Meanwhile, producer of “Silent Wish” and “Destined to be”, Ms. Chinasa Joy Onyechere, continues to raise the bar in Nollywood. Premiering her latest “Dry Waters” flick proved the claim beyond every reasonable doubt.

Onyechere informed at the premiere of the suspense filled two-hour movie that she has a desire not only to embark on nationwide cinema screening of the movie, but also to premiere the movie in UK and America, in addition to releasing the same in DVD, internet and mobile phones, amongst other channels.

She said, looking at the bigger picture of development a viable film industry in the country capable of attaining strong relevance at the international scene, “Dry Waters” has what it takes to make the difference.

Continuing, she added, “When we are done with this premiere today, “Dry Waters” shall continue the journey you have helped me to start by taking this film to a nationwide screening in all cinema centres.”

According to her, the process of premiering the movie is an improvement on what is obtainable in Nollywood, where movies are just released into the market, without appropriate measures being put in place to check the menace of piracy.

Onyechere, who is the current treasurer of the Association of Movie Producers (AMP), promised to use her new movie to reposition Kech Production Studios, her outfit, within and outside Nollywood.

Directed by Kelvin Ibanichuka, the suspense-filled two-hour movie, boasts of some leading names plying their trade in Nollywood. Among them are Monalisa Chinda, Kenneth Okonkwo, Paul Obazele, Chidi Ihezie-Okafor, Remy Ohajianya, among others.

Screen_played by Adim Williams, “Dry Waters' is thematically woven around critical family issues and how such issues could affect the larger society, if not properly handled from the foundation stages. “I have produced and funded over a dozen films in Nollywood, but decided to premiere this one elaborately, because it's a story very dear to my heart.