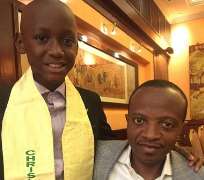 Singer, Innocent Idibia better known as 2Face, is indeed proud of his blood, Nino idibia, whom he had with Sunmbo Adeoye, as he has made him proud.

Nino has really taken after his father, 2Face in music as he just won best Music Prefect on his gradaution day at Chrisland School, Ikeja.

As a music prefect, Nino has not only demonstrated his capacity to lead and work with a team via his numerous musical presentations, but has surpassed many expectations even on bigger platforms.