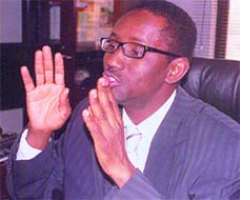 Mallam Nuhu Ribadu
The pioneer Chairman of the Economic and Financial Crimes Commission (EFCC), Mallam Nuhu Ribadu has literally become a 'cat with nine lives'. Since his sudden emergence in the nation's slippery public sphere, fate has continued to play tricks on him.

For the Adamawa born Law graduate of Ahmed Bello University (ABU), life has taken him to the mountaintop and also dropped him down the valley almost simultaneously. The fortunes of the Police officer have been swinging like a pendulum since he was appointed to head the EFCC.

After weeks of speculation, the former anti-corruption Czar was last week reinstated but retired as Assistant Inspector-General of Police seventeen months after he was controversially dismissed from the force.

A philosopher, Ralph Butler, perfectly captures Ribadu's metamorphosis in his statement that 'life is the art of drawing sufficient conclusions from insufficient premises' while in the words of another great thinker, Blaise Pascal, 'it is not certain that everything in life is uncertain'.

But in all of this seeming confusion over the essence of life, what is certain is that man's fate is not only unpredictable but hangs in the balance.

Like a bolt from the blues
The former President, Olusegun Obasanjo appointed him to head the EFCC in 2003. In 2007, he was reappointed 2007 and promoted to Assistant Inspector General of Police.

Before his appointment as the anti-graft boss, he was an Assistant Commissioner for Police but within a period of four years, he was catapulted to the rank of Commissioner of Police and subsequently, to Assistant Inspector General of Police. At the twilight of Obasanjo's administration, speculations were rife that Ribadu was even going to be named the Inspector General of Police. His meteoric ascendancy in the police force, to many, was compensation for the hatchet job he did for his paymaster, such as keeping his political foes on their toes.

'The fear of Ribadu, is the beginning of wisdom' in both political and business circles, became a clichÃ© that was real during the years of Obasanjo. In fact, Ribadu was a 'small god' and even the 'high and mighty' including his friends and associates dreaded the tough talking cop.

Without doubt, many believe that in his years as the anti-corruption Czar, he brought dignity and pride to Nigeria. Those in this school of thought are unanimous that he genuinely fought corruption in the country. But there are those who insist that he was used to fight an agenda of the Obasanjo administration in particular and the Peoples Democratic Party (PDP) in general.

But under Ribadu's administration, the EFCC took up several prominent Nigerians including bankers, former Governors, Ministers, Senators, other high-ranking politicians, advance fee fraud ('419') gang operators among others. The EFCC under him issued thousands of indictments and achieved about 270 convictions. One notable case was that of his boss, the then Inspector-General of Police, Mr Tafa Balogun, who was convicted, jailed and made to return £150 million under a plea bargain.

Ribadu's achievements in the EFCC included the de-listing of Nigeria from the FATF List of Non-Cooperative Countries & Territories, admission into the prestigious Egmont Group and the withdrawal of the US Treasury FINCEN Advisory on Nigeria. They helped make the EFCC the foremost anti-corruption enforcement agency on the continent.

The anti-climax
The election of late President Umaru Yar'Adua turned out an anti-climax in the hitherto blossoming career and overwhelming influence of Ribadu in the nation's power equation. No sooner had the government of the former Katsina State governor come on board than rumour of his impending removal as the EFCC boss came to the public domain. It later did not come as a surprise when he was relieved of his seat in December 2007 and sent for a mandatory one-year course at the Nigerian Institute of Policy and Strategic Studies (NIPSS), Jos.

While he was in Kuru, he was demoted to the rank of Deputy Commissioner of Police (DCP) along with 139 officers, who were allegedly wrongfully promoted. Ribadu, who did not accept his demotion, was said to have found it difficult to wear his rank of DCP. A charge of misconduct such as improper dressing like when he appeared before the President on November 13, with other NIPSS participants, in plain clothes, where others were properly dressed was made against him.

The demotion from the rank of an AIG to that of the Deputy Commissioner of Police, put a question mark on his qualification for the elite institute. The high point of his ordeal was when Ribadu was stopped from participating in the graduation ceremony of the institute after successfully completing the programme.

President Yar'Adua had to intervene for him to be given his certificate as a graduate of NIPSS.

The promotion on April 9, 2007, three weeks before the inauguration of Yar'Adua, was later challenged in court on the basis that it was 'illegal, unconstitutional, null and void, and of no legal effect'.

But also at a Federal High Court in Abuja, he had filed an action seeking to stop Okiro from relating with him as a Deputy Commissioner of Police. But the question before his retirement was: Even if he succeeded in his effort to get justice, would he still have been comfortable working in an establishment he was fighting? But for him, the situation was like 'one week, one trouble'. Indeed, nobody would have contemplated a Ribadu being in trouble but the table turned and the Adamawa-born cop tasted the same bitter pill he fed others when he was lord of the manor.

Light at end of the tunnel
First it started as a rumour and gained prominence that Ribadu and the former Minister of Federal Capital Territory (FCT), Mallam Nasir El-Rufai would soon be back to the country. The speculation was that the federal government was favourably disposed towards them and was desirous of making them relevant under President Goodluck Jonathan's administration. True to predication and in a twist of fate, the former EFCC boss who is also a Senior Fellow at St. Anthony's College at Oxford University was last week re-instated to his former rank of Assistant Inspector General after his career was cut short by his controversial dismissal.

The reinstatement takes effect from December 2008 when he was kicked out of the police by a panel chaired by the current IGP, Ogbonnaya Onovo.

It will be recalled that Ribadu was charged before Justice Constance Momoh for alleged failure to declare his assets after leaving the EFCC in 2007, but his counsel, Femi Falana, had insisted that Ribadu was being politically persecuted by the late Yar'Adua's regime. In dismissing the case eventually, the chairperson of the tribunal stated that the Attorney General of the Federation (AGF) has powers under Section 174 to discontinue any litigation relating to a federal offence at anytime before judgment. The tribunal also ruled that the notice of withdrawal of the case by the AGF takes precedence over the motion filed by the accused person asking for the dismissal of the charges.

The case was struck out and the bench warrant issued for Ribadu's arrest also cancelled.

The Police Service Commission, headed by Parry Osanyande, took the decision on Ribadu's dismissal after a marathon meeting in December 2008. His sack was based on allegations of indiscipline, insubordination and absence from duty.