CHARLES OPUTA: PROBLEMS I HAD WITH MY DAD WHILE BUILDING CHARLY BOY BRAND 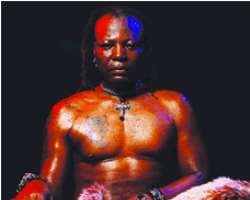 Charly Boy
Looking at Charles Oputa, aka Charly Boy, it may be difficult to believe that he could have been a priest. But that's the truth. The musician, social critic and activist was actually an altar boy for years. However, he later changed his mind about being a priest.

Charly Boy has sensationally told his story, about his growing up and the challenges he had building his peculiar brand. He revealed how his father opposed his concept and insisted that he became a lawyer.

In this interview, Charly Boy was his true self. He was frank.

Let's look at your parents' influence on you. How did they raise you?

Well, what I remember about my childhood is that there was so much love and understanding. My parents then were like older young people because we related to them as equals. They were like friends and we were always encouraged to speak and say what we had in our mind. Though we were taught to respect elders, we had no fear. I never heard my parents tell us to go to our room because there were visitors, eventhough sometimes you jump into their conversation without even understanding it. Those are the qualities that have kept me grounded. It has made me to seek out people who have wisdom. I always go to them to learn and these were situations that presented themselves and helped me to build the confidence I have today. There was no way I could have succeeded with the brand Charly Boy, which was a deviation from the norm without first believing in myself as a person

But would you say those values you imbibed while growing up actually prepared you for the multiple roles you are playing through that brand?

I will say everything is a sequence of my pedigree. There is a lot of spirituality in it, common sense and social justice. It wasn't just about the law. He combined these deferent things in his judgment. I think I took a whole lot from him, even without realizing it. When I was young I didn't have the best relationship with my father because I felt that I wasn't good enough for my father. I didn't know what he wanted from me; nothing that I did was good enough for him. We all decided to please my father so as to be in his good book. I remember a few years ago when we started Charly Boy. My father resisted the idea I had about building that brand. But later, he told me he was proud of me. That day, I almost jumped out of my bed. I said to myself, so this man can ever be proud of me; he could even acknowledge the fact that I am trying. It wasn't easy at the beginning. The tenacity and my consistency have over come all the problems I had. I think that is why till today I have earned his respect because I stuck to a thing and I did it to the best of my ability and I made a success out of it.

Did you ever agree that the path you took may not earn you success?

I was having so much fun; that is why I keep talking to people. I can't do anything that I will not enjoy. Even if I am being paid for it I would still make sure that the thing fits my essence. If I can't enjoy my work, then I know that I am doomed. Many Nigerians are in a position that ordinarily, if they were allowed to choose what they want to do, they would be doing something different. But here I am doing what I want to do. I have always done what I always wanted to do. That was why when my father was resisting my building Charly Boy brand, I also insisted. I told him that I was going to disown him if he could not see the beauty in what I was trying to do. He wanted me to be a lawyer. If I had done it I would have become a maverick lawyer. I wanted to be an entertainer. Little did I know that it was just a stepping stone for me, because from wanting to be that I have given in to being other things and that is the beauty. Sometimes, I would call my father to the side and I would tell him to imagine where I would have been if I had listened to him. And he would say to me thank God you didn't listen to me.

What did you learn at the point of realizing that many of the people would have done other things if they had the opportunity?

I discovered that many people missed their callings. I saw how a lot of people are frustrated in the position they are, just because they are too busy thinking about what their father or mother would say. I am not saying that people should move ahead and run around and do negative things. No. I am not doing negative things, but I have chosen where to stand and be different. That in, itself, is not negative. I have not really hurt anybody. I have added to the society more than I am taking away. With my philosophy, lifestyle, with the message I have I am contributing to the development of the society.

The fact that I am different does not make me a bad person. I am not responsible for people's misconceptions and perceptions. That's not my business. I wanted to be Charly Boy. Naturally, in the beginning it was difficult because my parents didn't understand what I was doing. People close to me didn't understand it. They felt that I could do something better. But what other thing could I do better than something I thoroughly and sincerely enjoy doing? The character, Charly Boy was built to shock timid Nigerians. So you can't really appreciate Charly Boy, except you have the discerning mind to see beyond all those mimics, body piercing and the rings.

What role would you say your training as a communicator played in what you are?

Actually, I set out to be a priest. I was an altar boy for about 15 years. I am a Catholic. My training prepared me to be a self-made person, somebody that has confidence in himself.

Was it your training that made you change from being a priest?

No. Once I was at puberty at my secondary school, I made up my mind against it.

Even at that young age you decided on your own?
My father, from the beginning fed us with an overdose of morality and spirituality. I remember some years back when some Jehovah's Witness people came to preach to Charly Boy because they taught that with all those my rings and the artifacts in my house I am satanic or something. They were quite shocked when I brought them in because once in a while I want to discuss the Bible. When they discovered how much I know about spirituality and the Bible they were surprised. I told them I believed in the spiritual thing. I am not so much of a churchgoer, mainly because I have had so much church in my life. It is incredible. My father is a knight; my mother is a head of the church in my place. So I grew up with church and religion. But then I figured that I'm now my own person; there must be another path as long as it is positive. There are so many paths to the same direction. I read the Bible but not as much as I did when I was young. I have been into too much of my mysticism, Buddhism and all these have helped to form the person I am right now.

Will it be right to say your religion is love?
Yes, that is it and I have lived my life in constant prayer. I don't have to kneel down to God and pray all the time, because I believe in the image of God. I am a small god. And as long as our qualities still connect with godliness, then we are on track and all the qualities and the care values that I represent connect with godliness.

What informs your activism?
My father had always fought for social justice. While growing up, I saw all people from all walks of life.

What informs your becoming a social critic?
My father's benevolence greatly influenced me. I could remember that he trained over 300 peoples from humble homes. These were not our relations, but it is ironic that he didn't want me to associate with these people. He assisted and even fought for their right. He preferred that I associated with people of highly privileged background, as I was. This was where we clashed. I was always associating with people of humble background. I was always generous to them..