I’ll End up Being a Prophetess not Pastor…Actress, Mary Uranta 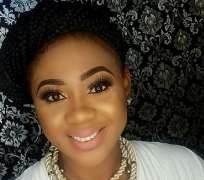 Nollywood actress and daughter of a Primate of Cherubim and Seraphim, Mary Uranta, has come out to make it known to her fans that she might be ending up in the church working for God.

In a recent chat with Punch, the pretty actress stated that she is already getting signs that she will end up being a prophetess instead of being a pastor.

She revealed that most of the dreams she had has been coming to pass as she is yet to get any form of visions.