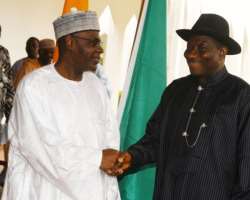 ABUJA, May 26, (THEWILL) - Deputy Senate President Ike Ekweremadu on Wednesday said there is no disagreement between him and President Goodluck Jonathan over who becomes the National Chairman of the ruling Peoples Democratic Party (PDP).

Ekweremadu made the clarification in a statement today stating that no disagreement between him and the President had stalled the selection of a new party chairman saying instead he has been working together with Jonathan on the issue.

The statement reads in parts, "I have no disagreement with the Presidency over anything, not least the choice of who will be the chairman of our party. Instead we are working closely together on the process to choose someone who will reflect the character and strength of the party across the country."

Ekweremadu said the South East caucus is working with other stakeholders in the party to present a candidate that will best reflect the true character of the party to the electorates.

The Deputy Senate President was reported to have been at a loggerhead with the President on the choice of a new PDP Chairman following their alleged support for different candidates.

While the President is reported to be backing former Senate President Pius Anyim, Ekweremadu who is leader of South East caucus is said to be supporting former National Vice Chairman, Nze Ozichukwu for the job.