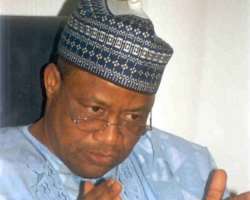 Reminiscent of the one-million-man march staged by the Youth Earnestly Ask (YEAA) for Abacha in 1994, some Nigerian musicians may, once again, converge to sing for former President Ibrahim Babangida who may be contesting for president in 2011.

And as part of efforts to realize his presidential ambition, Babangida, popularly known as IBB, is said to be recruiting some popular Nigerian musicians to help him reach out to the youths as well as members of the grassroots.

Nollywoodgists.com gathered that the artistes would hold grand concerts in some parts of the country including Abuja, Lagos, Kano, Kaduna and Port-Harcout after his campaign will have officially commenced.

The source also told Weekend Showbiz that some of these artistes would record campaign songs that would be aired on radio and television stations across the federation.

According to the source, some of the artistes that have been contacted by the Niger State- born retired soldier include Hip-hop music star, D'Banj whose song was used by the ruling Peoples Democratic Party (PDP) in the 2007 general elections; Peter and Paul Okoye, otherwise known as PSquare; the Yahoozee crooner, Olu maintain; Banky W; Gongo Aso crooner, 9ice; Abass Akande Obesere; Sule Adio Atawewe and many others.

Inn a chat with Weekend Showbiz, Obesere, who enjoyed great patronage from the former president during his last presidential campaign in 2007, said, “I remain the only artiste on the bill of the Babangida campaign. I am still in good contact with members of the campaign group and I know that no other musician has been approached for this purpose. In fact, I have been given the mandate to negotiate with any artiste that I know will do them good. I am the official musician for the Ibrahim Babangida campaign in 2011.”

Also, in a separate interview with Olu Maintain, he denied being approached by Babangida or any of his loyalists. “I also heard that they are talking to some musicians for his campaign, but I have not been approached yet. If they come, I will accept. Why won't I? I'm a musician and I will sing for anybody who is ready to pay my bill.”