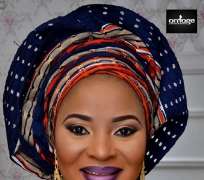 The news is yet to circulate but it is so sad that pretty Nollywood actress, Moji olaiya is dead. According to information Nollywoodgists.com gathered from a close source, she died of heart attack.

Moji who just welcomed a baby some months back was based in Canada with her baby when she suddenly passed away.

The actress just got involved in another marriage and was already trying to get things in other for herself and the cold hands of death took her away.

Moji, who is a daughter of the popular entertainer, Dr. Victor Olaiya, also lost her brother, Abidemi Olaiya, at a very tender age in May 2015 and now she is also gone in the month of May, 2017.

Lots of her fans who wake up to the news are still in shock at the sudden death. May her soul rest peace, Amen.