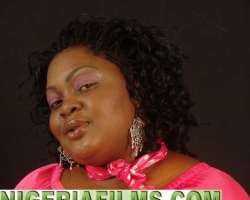 Eniola Badmus is better known as “Gbogbo big girls,” a notorious character she played in the award- winning Yoruba movie, Jenifa. That part, last year, won Badmus an award that has put her in the bracket of top Nigerian actresses. Not shy about her enormous size, Badmus often tells whoever cares to listen that she is 'big and beautiful', no wonder she often champions the course of plus- size women encouraging them to live their lives in full instead of wallowing in self-pity. Badmus has appeared in other movies including Aye Aramide, Adun Awuro, Okin, Tani, Black Brac, et cetera and is a regular feature in the series, Family Ties. Enjoy our recent chat with her

For the past two years or so, you have been one of the most- sought-after actresses in the industry. How do you feel?

I just thank God. I get my inspiration from Him. I believe in hardwork and being committed to what you do. I don't like being distracted. When I have something to do, I do it whole-heartedly. By and large, I'll just say: it's the Lord's doing.

Many attribute your success to the part you played in the award winning movie, Jenifa. When exactly did you go into acting?

I have been in this industry for about 13- years now. I think my first movie was an English one entitled, Brutal Times. I didn't really stumble into the profession because it's what I had always wanted to do. From my secondary school days, I was part of the drama group, then I went to the University of Ibadan to study Theatre Arts. My second degree though is in Economics, I got it from the Lagos State University.

Since you started with an English movie, why didn't you stick with it because today, you are mostly referred to as a Yoruba actress?

Contrary to that belief, I didn't abandon the English home video platform completely because I still appear on some television series which are done in English. I almost left once, but I had a rethink, with a mindset that I would not allow other peoples' wishes for me make me run away from a thing I love doing. I went to the Yoruba -speaking sector because I know that I will be accepted for who and what I am. I am happy where I am today, but don't get me wrong, I still do some English series. Yoruba is my language and I am sure I can do better in it. I am from Ijebu Ode (Ogun State).

Is sexual harassment part of the reasons for running away from the English movies sector?

(laughs). Well, I have been sexually harassed in the industry before – that was when I just started– but that wasn't what made me chose to go deeply into the Yoruba speaking genre. I am a Yoruba lady and I speak the language fluently.

You still haven't answered my question. Would you say your appearance in Jenifa was what brought you into the limelight?

Not at all. There was a film I shot in 2002 that actually brought me into limelight. It was entitled 100 years. It was directed by Yomi Ogunmola, but Jenifa sure added to my fame.

A few months ago, stories about you being gay was out there on the streets. How true was that tale and how do you feel?

I felt really terrible when those things were being said about me. They were not true and I wonder how such tales came about. Basically, I thank God there is no rumour right now. I am scandal free.

But is it true you are domineering?

No, I am not. I am a very playful, carefree and cheerful person. I treat people the way I want them to treat me; that's me.

Do you ever think, maybe, people are coming to these conclusions about you because of the kind of roles you play most times– either as leader of a gang, a prostitute or one hard character?

As you rightly pointed out, I am just playing characters that are not me. I said earlier that I am a cheerful person. In addition, I am a very simple person. I am an actress. I studied Theatre Arts and have been acting since I was young. I should be able to play any role that I am given well, so that people like you or others can enjoy it and even go as far as commending it. It is so unfortunate that some people would want to judge one by what they see you do on screen. It is sad.

You have tasted both sides of Nollywood, the English and Yoruba genres. Which would you say you will rather stick with in terms of reward?

I don't really want to pick because I shuttle between both. Yes, most people would say the English sector is more lucrative, but I will tell you that the Yoruba sector isn't doing too badly. The Yoruba sector provided me with a platform to make a name and that's how it is with us, we help ourselves to grow. Sometimes, it affects us financially though.

You are obviously one of the biggest actresses in Nollywood today. Does your size affect you in anyway in this profession?

Not at all. I am big and beautiful. You get it twisted when you feel I get affected by my size. I am Eniola Badmus, I am big and beautiful. If you think you don't want me on your set because of my size, that's a huge shame. My size does not affect how I feel, what I do or how I do it. I put my confidence in God and not in any man.

Well, by the grace of God, I see myself in the United States of America, married and with my kids.