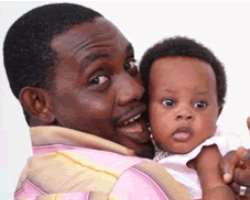 AY is your regular humour merchant, who makes audiences crack their ribs as they quake in ecstasy. But he does more than say funny things. To borrow his own words, AY is an all-encomp I'm assing show biz personality.

“I run a television show, I produce and am on TV everyday. I have a platform on HiTV and we have the AY TV, which runs on that platform every day. It runs both in Nigeria and the UK. Apart from that I produce, I direct, I act, I package events for companies and individuals, I consult with people and I am a writer,” AY says, reeling out his 'CV.'

Now that is what you can safely describe as jack of all aspects of entertainment business. Is the master of all? Your guess is as good as ours. In this interview, he let's us get a peek into how he shows love to his family. Excerpts….

Are you a modern dad?
Yes I am and I have serious time for family. As a matter of fact before now my office was located somewhere else, but now my studio, my office and house are located together. So I have all the time for my home and this doesn't stop me from traveling because I need to go and make the money to take care of the family. When I come back and see that there is vacuum in the family circle I often come and make it up to them. We could go out together but in a way there is a strong balance.

There is more balance on my part as a comedian than the man who is a banker out there because for some of them, they wake up and leaves home before the child is awake. By the time he comes back the child is already asleep. So all what he does is just to go to his child's room and pat his back and wait until Saturday or Sunday when such child would get to see his parent. Sometimes there are some events that I go to that are family oriented; so I always make sure I go along with my family so that they would be able to see how daddy is doing his thing out there.

While your daughter was younger did you help in changing her diapers?
Well, my wife should answer that question but I think I did that regularly. When we had our baby I simply told myself that she had performed her duty for nine months by carrying the baby and getting to the stage of delivery. When we had our baby whenever she was asleep I would be awake; before sleeping, my wife would tell me what I was supposed to do. She would say to me - put three spoons of that and add so and so quantity of water. Really, I was having fun because it was so easy for me.

Do you take her to school?
Of course I do that (laughs) although there are times we drop her off at school and we go together to pick her. But sometimes we shuttle, it's a duty routine between the two of us. But of recent we employed the school bus to come and pick her. However, there are times we go to pick her so that she would have a sense of belonging like other children.

Have you started attending P.T.A meetings?
No, I haven't started the PTA thing but I think I should leave that to the mum to handle for now. If I'm free and the need comes up I would but you know these things usually come up during weekends and that is more like the peak of my own call to duty.

You never found it demeaning doing all that for your wife?
Not in the least because before I became a full-grown man, and long before I got married, I was already doing things like that for my younger ones. I did that for all my younger ones; it was something I learnt from my mum early enough and for me to transfer it into my own life wasn't so difficult.

Do you help in doing other house chores too?
Of course I help out with other chores, but when I can't do so, I look for ways to reduce the stress for her by getting her help or having some other people in the house to help run things. But one thing I know that I won't do for her is to get someone that would cook for her because I love eating my wife's food.

What is wrong in eating other people's food?
Of course we all eat out and that food is made by some else but there are times you really want to get that satisfaction because the Bible says that two shall come together and become one. There are times you want to feel that oneness and sometimes it would come by way of eating your wife's food.

Do you cook for her too?
Oh, my God I can't remember when last I cooked for her, but I'm sure she would remind me in the toasting era. But after you had succeeded you now take backstage but its fun if I have to do so. Incidentally, recently she challenged me that I only talk about making food for her and I never do it. But I was forced to prepare a Niger Delta delicacy for her and blew out of proportion. We even invited our friends to witness and testify that this man can cook ogwueri, I know you can't spell it but I call it oil soup. (Laughs).

Why does it seem like romance ends after courtship?
It depends on individuals. I can only talk for myself. I always have cause to show love to wife everyday; I always have cause to think of something new to do to spark up the relationship, to keep it alive. Especially when I know that a lot of people don't believe in celebrity marriage and having their marriage intact. I'm not daft, the day I pick up Encomium or City People and I read one headline that something happened to a celebrity, it gingers me to fall back home to do something that would sustain romance between me and my wife. There is always something that keeps me going; you know the same zeal and attitude I put into show-business is what I also put into my marriage to sustain it.

What are your tips for making celebrity marriages work?
The simple thing is to get your partner to have full confidence in you. There are ways you can do this – it is not about having all the money in the world to give to her or by giving her all the jewellery. The thing is to be there for her – no matter what you are doing, just create time for the family.

Just when somebody is thinking to come and penetrate your family and bring in rumour and say something like 'we see your husband here, we see your husband there'. But your wife would say 'my husband wey you see there na him an me dey since o. You need to fill up that space and you need to attend to her needs as well. When you are doing all of these together you will know that there is a spark in the relationship. I can say all other private things but these are just the peripheral.

What makes her unique?
I didn't I just told you about her food and you were wondering why it has to be her. Well, nobody does it better! As far as I'm concerned no one does it better, but it also goes beyond cooking because she has a good heart; she is a young woman with the strong attributes of a mother. I'm a young man without a mum so sometimes I see my wife as my mum because she fills the vacuum completely. There are times when I am mismanaging myself and I always have her on my side to say to me – baby this is wrong, I think your action should have been this. And when I do things she asks me to do, it usually points towards positive directions.

Was it love at first sight when you met your wife?
No, it was business at first sight because back then I was organizing the Delta State beauty pageant and when I was leaving that what was when she was coming in. So I needed to put my last solid beauty pageant together, I needed it to be grand. Then I spotted her and I was like wow, this girl should be a part of what we are doing. She turned me down when I told her she had what it takes to be in the beauty pageant. But she said she was not cut out for it. I did everything to convince her but she refused. She even refused to give me her name.

Then we forgot about getting her involved in the pageant. After I left Abraka as a graduate, once in a while I would go there to supervise what the other guys were doing. But each time I went there I still saw this same girl always in the classroom, clutching one folder or the other. Then the interest became different now but she still refused to be friends with me in the first place. You know when you enter a system and you have been cautioned from home that it is about getting the degree and not get distracted. But when my distraction started it was heavy on her because I was consistently trying to see if I could win her over. And then when I wasn't making any effort at all that was when she came onboard because I had cause to be in Delta State University longer than I should because I suffered from a major priority problem.