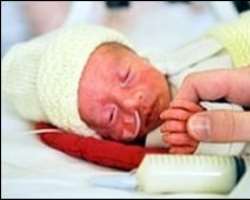 Women born prematurely or who have brothers or sisters who were born too early are 50-60% more likely to have a premature baby themselves, they say.

The University of Aberdeen study is based on maternity records of 22,343 Scottish mothers and their daughters.

Obstetrics & Gynecology journal says the work may help others to predict and plan for these high risk births.

Premature birth is a leading cause of death in newborns and can lead to long-term problems such as cerebral palsy. The development of a reliable test for premature birth is vital in ensuring our most vulnerable babies have the best possible outcomes

Andy Cole of Bliss charity
Attempts to predict and prevent spontaneous preterm births have been compromised by gaps in our understanding of what causes the condition, say the researchers.

“Further research should focus on the identification of candidate genes for the condition.”

Inherited risk
The study authors say their findings should help because they are robust.

The dataset they used came from the Aberdeen Maternity Neonatal Databank which is considered unique and particularly useful to researchers.

This is because the city has such a stable population and the majority of women in the Aberdeen city area give birth in the same hospital.

All the records related to single births only and did not include twins or other multiple pregnancies.

The researchers found that mothers-to-be who had been born prematurely were, on average, 60% more likely to have a premature baby if it was their first pregnancy.

For any subsequent pregnancies their risk was 50%.

Andy Cole, Chief Executive of Bliss, the special care baby charity, said: “We welcome any research that helps us better understand the causes of preterm birth and identify those at high risk.

“While this study's findings are interesting, further research is still needed in this area.

“The development of a reliable test for premature birth is vital in ensuring our most vulnerable babies have the best possible outcomes.”