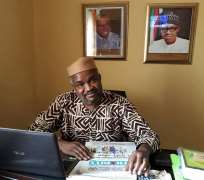 The Immediate past President Dr. Goodluck Jonathan entered global political history book when he voluntarily conceded electoral victory in March 2015 to his arch- political rival of the All Progressives Congress (APC) (Major General) Muhammadu Buhari (RTD) as he then was but now President Muhammadu Buhari.

The torrents of encomiums that followed his heroic decision to cede political power to an opponent came as a shock when viewed side- by- side with the tone of the electoral campaigns that trailed the hotly contested presidential poll.

As is known with the Nigerian political climate, politicians who run for offices are often known to have used hate languages to try to market their agenda and by these processes demarket their opponents as devil incarnates. The system of divide and rule and Ethno-religious politics has become notorious.

Besides the deployments of hateful languages which inflame passions and ignite inter-party violence, politicians in Nigeria are also deficient in ideological frames of mind.

Because of this absence of political ideologies during electoral campaigns, politicians use violence and financial inducements to score political victories.

The last election is blamed for the upsurge in insurgency of the armed boko Haram which reached the threshold of global notoriety as a terrorist organization when the leaders made known their intentions to control a part of Nigeria and to institute extremist Islamic Sharia regime in Northern Nigeria.

Regional political leaders were known to have deployed crude tactics aimed at presenting the then incumbent President as an infidel.

Even the then President Goodluck Jonathan alluded to this fact in his interview with Segun Adeniyi the former Presidential Media aide who only two days ago introduced a book titled 'Against the run of play' which documents the developments that gave way to the first ever 'defeat' of an incumbent and all powerful Nigerian executive Presidency.

Jonathan said boko Haram terrorists were used by Northern Politicians to score misguided victory at the polls even as he accused the then INEC chairman Mr. Attahiru Jega of manipulating the electoral process to produce a Northerner in the person of Muhammadu Buhari as President.

Dr. Jonathan cited the heavily distorted results from National Assembly and Presidential poll in Kano state which produced different figures of voters even though both elections took place simultaneously as clear evidence of electoral fraud.

For the fact that in the Presidential poll the APC got 1.5million in Kano but only 800,000 votes were recorded for National and State Assembly election shows how manipulated the electoral process was subjected to.

Also, a notorious dimension of electoral campaigns in Nigeria is the influence of bribery which rich political aspirants pay to officials of the electoral commissions to rig the electoral process.

This practice of bribery of the electoral officials prior to the conducts of elections are also followed by another set of bribery to compromise the judicial process should the loser of the election makes good his/her threats to pursue the line of post-elections litigations.

Because of the above twin-evils of political violence and bribery, most judges and the so-called electoral Umpires who have over the years played roles in pre or post-election activities have suddenly become so prosperous and are known to have amassed illicit wealth from the proceeds of these electoral heists.

As has been clearly stated, all of the campaign circles in Nigeria since independence have been marred by these inherent but man-made factors of bribery and electoral violence.

In a bid to stem the tides of violence and bribery, efforts were made in the past national assembly sessions to legislate against these evils but no significant milestone has been achieved due to absence of will power.

Again, the partisan and biased approach to anti-graft investigations and prosecutions which essentially targets only those politicians that are not within the ruling national party, it is imperative that measures are transparently put in place to check these anomalies.

The current national assembly will do Nigerians a whole lot of good should they succeed in effectively making laws that can check these evil trends.

Sadly the National Assembly has faced torrents of attacks from the Executive arm of government thereby crippling their capacity to achieve any of such milestones unless and except civil society pressures are brought to bear on them.

Apart from passing legislations that can support an institutional framework to checks the use of hate speeches during campaigns, the national assembly must be put under intense pressure to legislate against the overwhelming influence to which campaign finances play in determining who is declared the winner into the various political offices.

Nigeria by law must streamline the campaign finances of all political contenders.

In doing this, Nigeria needs to borrow from our then colonial masters the British who are currently witnessing another general election session so we imbibe the culture of issue-based electoral campaigns which are synonymous to the kinds of campaigns waged by all the notable parties in Great Britain such as the conservatives; the labour and the liberal democrats amongst others.

The UK's campaign finance regime is transparent and accountable even as no one political party is put at an advantaged position to corner juicy monetary donations to overwhelm the rest of the political contenders.

Nigeria must institutionalize transparent election finance mechanisms to keep away moneybags who have always hijacked the elected politicians to corner the resources of the Federation to their private businesses.

This trend of deregulated and indeed opaque election finance regime in Nigeria is the reason why Nigeria is in economic recession.

As Nigeria gradually approaches another electoral campaigns era, it is not too much of a task for all Nigerians to put hands on deck to institutionally bring into being, electoral campaigns that are devoid of these destructive tendencies such as the use of hate speeches; influences of illicit money and physical violence.

Politicians must be tasked as a matter of legal obligations in Nigeria to eschew the evils of hate speeches, influence of bribery and campaign violence just as it is obtainable in GREAT Britain which we can all see even on televisions as the gladiators in the June 8th snap election are currently campaigning based on issues of development and national security.

In Britain, the politicians who are essentially parliamentarians begin every election campaign era with what is known as final prime minister’s questions in Westminster.

In this year’s prime minister’s question time which marked the end of the just rounded up parliamentary session, the leading protagonists and antagonists took their turns to try to outdo each other in seeking to carry the support of the electorate but only minimal verbal insults were noticeable.

The British press reports that Mrs. Theresa May and Mr. Jeremy Corbyn have gone head to head in the final prime minister’s questions before the general election, exchanging campaign slogans interspersed with insults before a packed and noisy Commons.

Corbyn reportedly used what could prove his final appearance as opposition leader to return to his tactic of reading out emails from voters, explaining concerns about government policy on issues including the Nation Health Scheme, stagnant wages, school funding and pensions.

Mrs. May, was cheered on by what political watchers described as an exuberant backbench, repeatedly turned the questions back to what she said was Labour’s inability to safeguard the economy and Corbyn’s unfitness to be prime minister. Geremy Corbyn hasn't help his national public image by promoting such mundane campaign promise to introduce many more public holidays in order to try to unite the families. His political rivals see this as a failure to fully appreciate the enormity of the economic challenges confronting Great Britain and for the fact that more public holidays means more loses to the Economy.

Tony Blair a Labour party erstwhile Prime Minister told the SkyNews television that if the pollsters are right today, the winner of the Prime minister's position is Theresa May of the Conservative party or Tories as they are called.

The session of the Prime Minister's questions ended with lengthy near-campaign speeches by the two leaders, distilling the messages they will present to voters before the 8 June poll, according to the media coverages by several British newspapers.

The media reported that not only were Mrs. Theresa May and Geremy Corbyn’s exchanges longer than usual, the session as a whole lasted a record 58 minutes, almost double the official half-hour schedule.

Mr.Corbyn focused on the NHS, following on from a question in which he quoted Sybil, an 88-year-old woman who he said was frightened of having to use an underfunded and overstretched health service.

“The NHS has not got the money it needs; the prime minister knows that,” the Labour leader said. “She knows waiting times and waiting lists are up. She knows there’s a crisis in almost every A&E department. Maybe she can go to a hospital and allow the staff to ask her a few questions.”

He continued: “Strong leadership is about standing up for the many, not the few. But when it comes to the prime minister and the Conservatives, they only look after the richest and not the rest.

“They are strong against the weak, and weak against the strong. Far from building a strong economy, schools and our NHS are being cut, people can’t afford homes and millions can’t make ends meet. That doesn’t add up to a stronger economy for anyone.

“The election on 8 June is a choice – between a Conservative government for the few, and a Labour government that will stand up for all of our people.”

But Mrs. Theresa May began her response by criticizing the record of Labour in Wales over the health service there, before focusing on the election, says the highly critical British newspapers.

“In something over six weeks we will be back at these dispatch boxes again, and the only question is: where will we be standing?” she said. “Who will be prime minister of this great country? He says the choice is clear, and the choice is clear: every vote for him is a vote for a chaotic Brexit; every vote for me is a vote to strengthen our hand in negotiating the best deal for Brexit.

Using her key campaign phrase, which she had already said repeatedly in the exchanges, May ended, to cheers from her MPs: “Every vote for me is a vote for strong and stable leadership in the national interest, building a strong and more secure future for this country.”

The focus on what the Conservatives argue is Corbyn’s weakness as a leader began at the very start of prime minister’s questions, with Tory backbencher Michael Fabricant adopting the “strong and stable leadership” mantra for a question about the upcoming West Midlands mayoral election.

The Liberal democrats have already ruled out any possible alliance or coalition with either Labour or Conservatives.

Interestingly, the main planks of the campaign in UK are on the Economy, Brexit, immigration, Health sector and national security.

Nigerian politicians must be made to debate developmental issues and compelled by law to stop the use of hate speeches.

Disclaimer: "The views/contents expressed in this article are the sole responsibility of Emmanuel Onwubiko and do not necessarily reflect those of The Nigerian Voice. The Nigerian Voice will not be responsible or liable for any inaccurate or incorrect statements contained in this article."
Articles by Emmanuel Onwubiko
9-8-2017  My Journey To Would Be Star University In Idimuje-ubgoko11-5-2017  South East And Voter’s Registration9-5-2017  Macron: Lessons For Nigeria 25-4-2017  Issues In French, British Elections21-4-2017  As Eze Goes To South SudanMore...