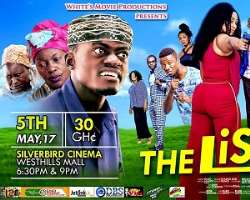 The much talked about movie, 'The List' from the camp of White's Movie Production is set to hit the length and breath of the the country.

The premiere starts in the capital city, Accra at the West Hills Mall on the 5th of May, 2017 at 6pm and 8pm, first and second shows respectively.

The movie, 'The List' even before its premiere has started gaining grounds on social media amidst high expectations from the fans of movies.

In an exclusive interview with SeancityGh, Ellen said Ghanaians should expect something big from her since her production has a lot of surprises for the general public.

The camp of White's Movie Production, a production house owned by Ellen White is one of the fastest movie productions in Ghana. She adds 'The List' to Revelation, Mayefuo and Medofo Pa and Fault which had a successful premiere in London and Netherlands making it four from her production.