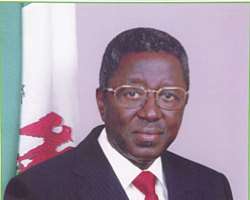 By Jude Owuamanam, Jos
Tuesday, 25 May 2010
A member of the Presidential Committee on Jos crisis and former Minister for information and Communication Alhaji Dasuki Nakande, has said that the government of Plateau State should be blamed for the recurring crises in Jos.

Nakande, who was reacting to last Saturday's killing of two Fulani herdsmen at Tusung in Barakin Ladi Local Government Area of the state, said that it's only the resignation Governor Jonah that can bring the crises to an end.

He spoke to newsmen in Jos on Monday at the venue of the committee's meeting.

Nakande had arrived at the venue for the winding up of the committee's assignment when he was told that Jang had summoned a stakeholders' meeting at Government House, Rayfield.

The former minister, fuming, said that he was not told about the meeting. But when he went inside he discovered that other Muslim members of the committee had equally boycotted the meeting.

He, too, decided not to go.
When confronted by newsmen, Nakande said that the only option available to Jang, 'Is to toe the path of honour and resign as governor of Plateau state.

He said, 'By now it has become obvious that it is Jang that is sponsoring the crises in Jos as well as the killings of Hausa-Muslims in Jos.'

His words, 'I m not attending any peace meeting with Gov. Jang under the guise of any stakeholder when we know it is the same man calling the meeting that is sponsoring the same killings.'

'I keep saying it that the governor is the sole sponsor of the genocide against Hausa Muslims in Plateau state. If not so why are all the attacks happening in Berom land, it showed the truth that I have been saying that the Beroms are the problem and their governor is the sponsor'

Asked to proffer solution to the crises, the former minister maintained that 'the only solution to continuous bloodshed in the state is for Gov. Jang to resign and submit himself for trial for genocide'

But the Director of Press Affairs to the governor, Mr. James Mannock, said that the governor or anybody would not join issues with the ex minister

'The governor will not join issues with Nakande or anybody. All that we are interested is in finding a lasting solution to the crises in this state.

However the stakeholders meeting went on in spite of the boycott by Hausa Muslims in the state as the meeting summoned by Jang over the recent crises at the weekend was well attended by other stakeholders including formers governors of the state, Chief Solomon Lar, Mr. Fidelis Tapgun and Chief Joshua Dariye and other elders in the state.

Before the meeting went into close door, Gov Jang stated that he wished that the meeting would be the last stakeholders meeting he would summon to discuss Jos crises.

His words, 'I am not happy calling citizens to discuss crises all the time, we should have been meeting to discuss development and to discuss concrete issues to move the state and the country forward.

'Notwithstanding the current situation, I am poised to round off my government on a platter of peace and I will do everything within my power to bring lasting peace to this state so that this state will regain its popular name as home of peace and tourism' said Jang.

Chief Solomon Daushep Lar, chairman of the presidential committee on Jos crises in his own remarks said he had wished such stakeholders meeting over the crises hold regularly so that the project of restoring peace to the state will make better impact.

Lar said, 'Let other states not see plateau as the worst state in the federation because of this incessant crises, worst than this had happened in other states but that will not deprived us from solving our own problem. And we will solve the problems of crises in this state.'

Lar used the opportunity to condole the families of those who lost beloved ones in all the crises in the state.