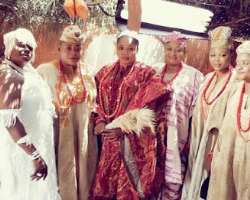 Nollywood actress, Kemi Afolabi, has been working tirelessly towards making a strong impact in the society and also making a name for herself and she is not relenting at all.

The actress is currently on a movie set of her own production and like her plans; she has just shot a movie where she had only female casts.

Some of her colleagues have been trying their skills on various styles of shooting and this will be the first of its kind from the versatile Yoruba actress.