CONFUSION IN KADUNA OVER DEP. GOV. 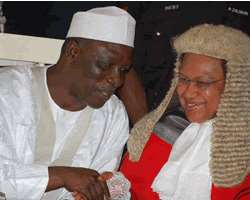 But his choice, Daily Sun investigations revealed, is not going down well with the ruling Peoples Democratic Party, (PDP) stakeholders in the state, especially the lawmakers, who are insisting that having lost the opportunity of 'getting anything' under Sambo, the only way they could be compensated was to appoint one of their own as the deputy governor.

And in order not to limit their chances, they presented both their Speaker, Alhaji Ahmed Hassan Jumare who is from Zone 1, Kaduna North Senatorial District and the Majority Leader, Honourable Bashir Zango Aya, who is from Zone 2, Kaduna Central Senatorial District, the Zone which ordinarily should have produced the deputy governor, since the former governor is from that Zone.

Apart from these two people, other names that featured prominently on the list of possible nominees include the incumbent Information Commissioner, Alhaji Saidu Adamu and former PTDF Executive Secretary, Alhaji Yusuf Abubakar, known in the local parlance as 'Mairago.'

Daily Sun further learnt that Vice President Sambo had told the stakeholders whom he met with group after group last Saturday that he was not ready to interfere in who the governor chooses, since he (governor) would be the one to work with the person.

And by late Saturday night, Yakowa was said to have settled for Yero, as his new deputy. His name is expected to be sent to the House anytime this week for confirmation. Yero's nomination has, however, thrown up confusion in Kaduna, especially within the Zone 2, which is feeling that the former governor was responsible for the 'apparent shortchanging of the zone.'

A senior government official who confirmed Yero's nomination said 'our former governor cannot say he had no hand in this. When President Jonathan wanted to appoint a Vice President, he took into consideration the geo-political zone where the former President comes from, which is North West. Therefore, we expected our former governor, who is now our leader, not only in Kaduna State but the entire North, to have advised the governor appropriately.

'We are not saying he should have told Yakowa who to pick, but he should have advised him that 'make sure anyone you're picking is from Zone 2, pure and simple. I can confirm to you that Yero's nomination has caused confusion within the party. And I can tell you that the House will not confirm him because the Honourable members are not happy. They are angry.'

Asked what could have informed the choice of Yero, especially since he is not a known politician, the source further said, 'I'm sure the governor wants someone who does not know anything about politics, that will not give him problem. This is my thinking, because of all the names they presented to him, Yero is nowhere compared to the others, politically speaking. This is why some of us are finding it difficult to believe our former governor that he had no hand in it.'

Efforts to get the Information Commissioner's comment on the issue proved abortive, as he failed to pick the several calls put to his line. Even when an SMS was sent to him, he failed to reply as at press time.

Efforts to also get the Speaker to comment also proved abortive, but a lawmaker who pleaded anonymity confirmed the development.

The lawmaker said 'you saw us yesterday (on Saturday) at the Government House. We met the Vice President, and we told him our mind. It is true they have picked Yero, but we are not ready to confirm him. This is not because they did not pick any of us, it is due to the fact that Zone 2 has been cheated and we have to reverse it,' the lawmaker added.

Daily Sun recalls that in the last three years, the House has always 'cooperated' with the executive arm of the government. If, therefore, it carries out its threat, it would be the first time the lawmakers would be making attempt to assert themselves in the scheme of things in the state.